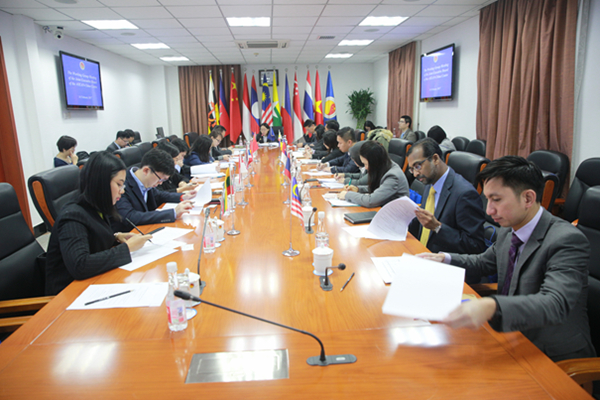 On 14 February 2017, the Joint Executive Board (JEB) Working Group Meeting of ASEAN-China Centre (ACC) was held at the ACC Secretariat. Representatives from Asian Department of the Foreign Affairs Ministry of China and Embassies of ASEAN Member States attended the meeting. The meeting was chaired by Ms. Huang Ying, Director of General Affairs and Coordination Division of ACC, and attended by heads of all divisions of ACC. This was the first Joint Executive Board Working Group Meeting held in 2017.

Ms. Huang Ying expressed her gratitude for JEB’s strong support to the ACC Secretariat. She noted that 2017 is the 50th anniversary of ASEAN and the Year of ASEAN-China Tourism Cooperation which means new opportunities for the development of ASEAN-China relations. To implement the important consensus reached by leaders of both sides and 19 flagship projects approved at the 6th Joint Council Meeting, the ACC Secretariat will maintain close contact with JEB members, and welcome views and suggestions of all sides so as to ensure the success of ACC’s work.

Mr. Ivan Frank M. Olea, Minister and Consul of the Embassy of the Philippines, briefed the meeting on the priority areas of the Philippines, rotating Chair of ASEAN, to promote ASEAN Community building. He expressed the readiness to have closer contact with the ACC Secretariat in a joint effort to deepen ASEAN-China practical cooperation. Ms. Xu Hui, Deputy Director of the Department of Asian Affairs of Chinese Foreign Ministry, updated the meeting on the development of ASEAN-China relations and China’s priority in advancing cooperation between ASEAN and China. She stressed that China is ready to build development synergy with ASEAN, build on the good foundation of a number of successful activities held in 2016 to mark the 25th anniversary of China-ASEAN dialogue relations and the Year of Educational Exchange, and seize new opportunities to promote all-round development of China-ASEAN relations.

Officials of four ACC divisions briefed the meeting on the progress made in trade, investment, education, culture, tourism and media fields since the beginning of 2017 and the work plan going forward. Representatives of JEB members commended the efforts made by the ACC Secretariat, and put forward constructive ideas and suggestions on relevant cooperation projects. They pledged continued support to the ACC Secretariat, and expressed their hope that ACC will continue to harness its strengths to promote practical cooperation between ASEAN and China in various fields.