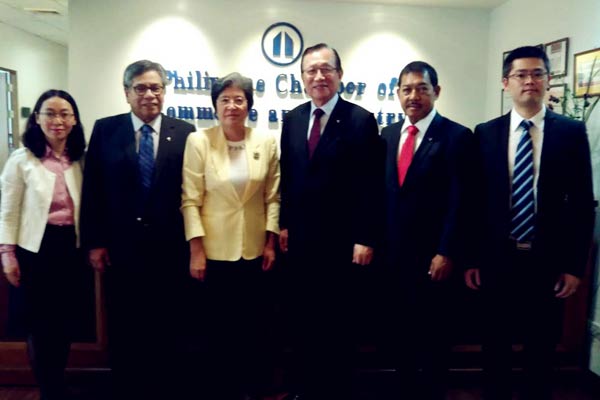 Secretary-General Yang briefed on the mandate of ACC and said that trade and investment are important priority areas of ACC. Since its inception 5 years ago, ACC has worked to raise the awareness of the China-ASEAN Free Trade Area policies, promote the two-way trade and investment, facilitate the establishment of ASEAN Commodity Centres in Chinese cities such as Yiwu, Tianjin, etc., build bridges between SMEs of both sides, explore ways to expand cooperation in E-Commerce, and its efforts were widely appreciated. ACC will continue to implement the important consensus reached by both leaders, fully play the role as a one-stop information and activities centre, hold economic cooperation forums, organize mutual visits of trade and investment delegations, promote economic cooperation in provincial level and build bridges between SMEs. ACC will organize a Chinese media trip to visit some ASEAN countries, including the Philippines in June 2017, to learn the development of ASEAN over 50 years and the outcomes of ASEAN-China practical cooperation. PCCI has been playing an important role in promoting Philippines-China and ASEAN-China relations. ACC would like to enhance communication with PCCI and jointly carry out relevant activities, with an aim to advancing the development of Philippines-China and ASEAN-China economic cooperation.

President Bacelon commended ACC’s efforts in promoting practical cooperation between ASEAN and China. He said PCCI is committed to promoting Philippines-China economic cooperation and maintains sound communication with relevant Chinese government departments, local governments and industries. Last October, he had the opportunity to accompany Philippine President to visit China, where he sensed the strong will of the Chinese side to enhance the Philippines-China relations, and he would like to continue to play a bridging role in advancing the cooperation between both sides. PCCI had signed MoU on cooperation with the Bank of China, which, he believed, would be conducive to the business matching among SMEs of both sides. PCCI is willing to strengthen cooperation with ACC, look for new business opportunities, build new platforms, and make new contributions to lift the level of Philippines-China economic cooperation.