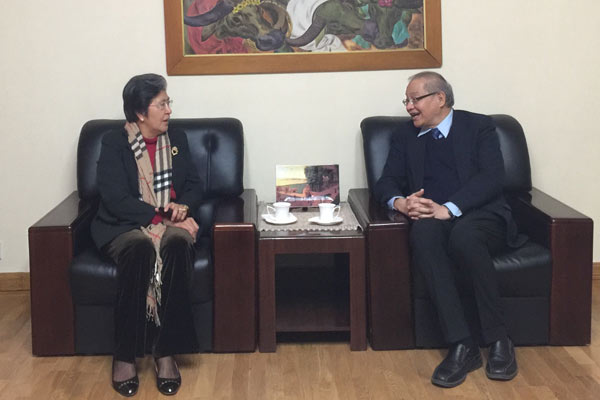 On 13 March 2017, H.E. Mme. Yang Xiuping, Secretary-General of ASEAN-China Centre (ACC) met with H. E. Jose Santiago Romana, Philippine Ambassador to China, where they exchanged views on ways to promote practical cooperation between the Philippines and China as well as between ASEAN and China. Mr. Ivan Frank M. Olea, Minister of the Embassy of the Philippines, and Mr. Zhang Xuehai, Deputy Director of the Information and Public Relations Division of ACC, attended the meeting.

Secretary-General Yang Xiuping congratulated Ambassador Romana on assuming his post in China, thanked the Philippine Embassy for its strong support to ACC over the years and mentioned ACC’s mandate and recent work. She said that ASEAN-China and the Philippines-China relations are standing at a new starting point with new historical opportunities. 2017 marks the 50th anniversary of ASEAN and the ASEAN-China Year of Tourism Cooperation, and the Philippines has taken over the rotating chairmanship of ASEAN. ACC is ready to strengthen contacts with the Philippine Embassy to well implement the 19 flagship projects approved by the ACC Joint Council and advance ASEAN-China and Philippines-China cooperation in trade, investment, education, culture, tourism and media to the benefit of the peoples on both sides.

Ambassador Romana spoke highly of the tremendous work and achievements of ACC in promoting ASEAN-China friendly exchanges and cooperation in various fields. He said that there is a series of important agenda between the Philippines and China and between ASEAN and China. For instance, President Rodrigo Duterte will come to China to attend the Belt and Road Forum for International Cooperation in May 2017. The opening ceremony of the ASEAN-China Year of Tourism Cooperation will soon be held in the Philippines. Mr. Zhong Shan, Commerce Minister of China, had recently paid a successful visit to the Philippines. All these open up broad vistas for bilateral cooperation. The Philippine Embassy in Beijing will continue to give strong support to ACC’s work, actively participate in various activities organized by ACC and stands ready to work with ACC to jointly promote the in-depth and enduring development of Philippines-China and ASEAN-China relations.