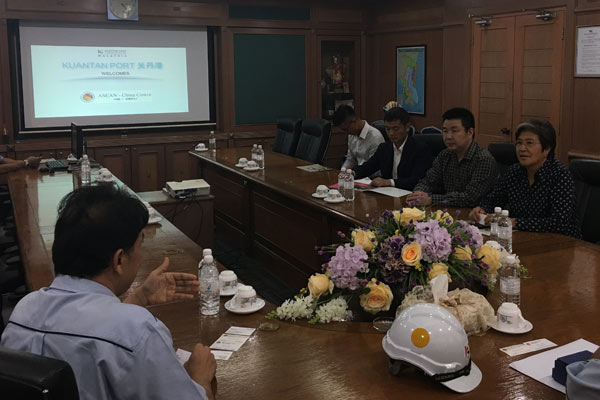 On 3 March 2017, H.E. Mme. Yang Xiuping, Secretary-General of ASEAN-China Centre (ACC), visited Kuantan Port of Malaysia for better understanding of the construction of infrastructure and the breakwaters, and the expansion and international cooperation of the Port. Mr. Lu Yong, Executive Vice General Manager of Beibu Gulf Holding (Malaysia) Sdn Bhd, accompanied the visit.

During her discussions with the management of the port, Ahmad Kamil Bin Shaharudin, General Manager of Kuantan Port Consortium Sdn Bhd, and Alimi Bin Ibrahim, Senior Manager of Kuantan Port Consortium, said that since the Malaysian government approved the the establishment of the Free Zone Port in June 2016, Kuantan Port has been updating and renovating the existing port in line with relevant standards and requirements. One breakwater of the new terminal will jut out for 4.6 kilometres into the sea. On completion, this 1.1-billion-ringgit breakwater will be one of the longest in South-East Asia. Also, other under construction is the New Deep Water Terminal that will be capable of berthing vessels up to 150,000 tons deadweight. This project that costs 1.6 billion ringgit includes dredging the existing waterways to 18 metres deep. It is expected to be completed in 2018. Kuantan Port has businesses with China, Australia, Cambodia, Indonesia, the Philippines, Singapore, Thailand, Viet Nam, and so on. The management looks forward to expanding business in ASEAN countries and China by leveraging the platforms provided by ACC, and welcomes more Chinese enterprises for the discussions on relevant businesses.

Secretary-General Yang Xiuping commended the active role that Kuantan Port plays in promoting ASEAN-China business ties. She noted that ASEAN and China are close neighbours with great complementarity, huge markets and enormous development potential. She hoped that Kuantan Port will enhance exchanges with foreign countries and increase mutually beneficial cooperation with China and ASEAN countries to help ensure the sustained and deep-going development of ASEAN-China relations.