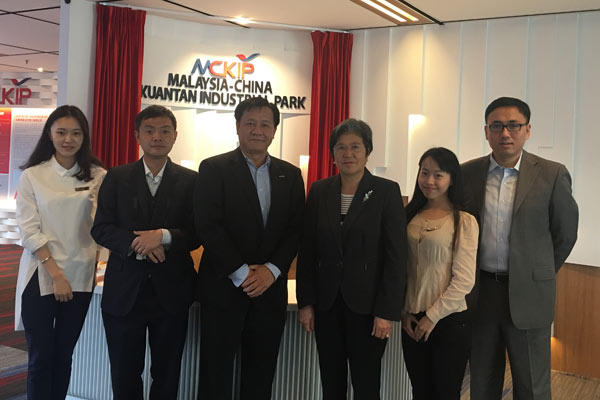 On 2 March 2017, H.E. Mme. Yang Xiuping, Secretary-General of ASEAN-China Centre (ACC), met with Mr. Lee Kok Hoo, manager in charge of the Malaysia-China Kuantan Industrial Park (MCKIP) for the Malaysian side. Ms. Gong Ying, manager of the Chinese side attended the meeting.

In his outlining of the course of development, progress of attracting investment, and future plan of MCKIP, Mr. Lee said that MCKIP, opened in February 2013 and covering an area of 12 square kilometres, is a major intergovernmental project of cooperation initiated and promoted by the leaders of Malaysia and China. The construction of the peripheral infrastructure has been completed for the main part. Through the joint efforts by the Malaysian and Chinese sides to attract investments, the Alliance Steel with a gross 1.4 billion US dollar investmentis scheduled to go into production at the end of 2017. MCKIP looks forward to strengthening communication with ACC to move forward the construction of its industry.

Secretary-General Yang Xiuping spoke highly of the achievements in the construction of MCKIP. She overviewed ACC’s mandates and the work it has done in promoting ASEAN-China practical cooperation. ACC will continue to play its role as a one-stop information and activities centre to promote links between enterprises between both sides. She hoped that MCKIP will seize the opportunity to bring in more competitive projects in line with industrial development so as to make greater contributions to deepening ASEAN-China practical cooperation.