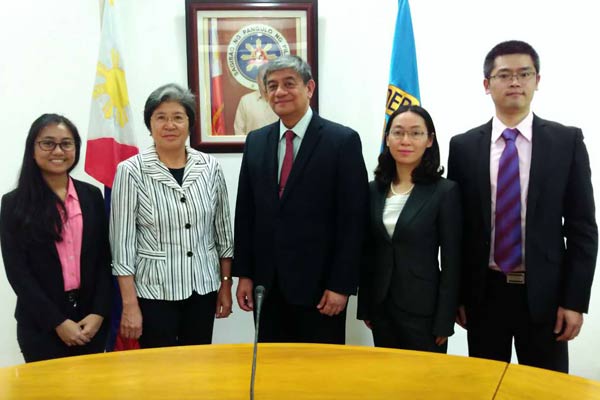 Secretary-General Yang Xiuping expressed appreciation to DOE for its support rendered to ACC. She said ACC carried out a series of colourful activities in the year of 2016 to commemorate the 25th anniversary of ASEAN-China dialogue relations as well as the ASEAN-China Year of Educational Exchange. This year is the 10th anniversary of China-ASEAN Education Cooperation Week (CAECW), and the educational exchange and cooperation between both sides are gaining new opportunities. At the 19th ASEAN-China Summit, Chinese Premier Li Keqiang proposed to build people-to-people exchanges as a new pillar in ASEAN-China relations with education and tourism as priorities. He also proposed to achieve the goal that the total number of two-way students’ mobility could reach 300,000 by 2025. Under the new circumstances, ACC will make vigorous efforts to promote cooperation in relevant areas and enhance the mutual understanding and friendship among the young people. ACC looks forward to DOE’s continued support, to jointly push forward ASEAN-China educational cooperation.

Undersecretary Muyot highly valued ACC’s work, and said DOE attaches great importance to strengthening friendly cooperation with China. With the development of Philippines-China relations, both sides should further strengthen exchanges in education and culture, especially to enhance the mutual understanding among the young people. There are 72 high schools in the Philippines that are currently conducting Chinese Language classes while the number of Chinese Language teachers is still limited. There is an ample room for cooperation between both sides in areas such as teachers training, teaching and research, vocational education, etc. DOE would like to enhance communication with ACC, to expand practical cooperation in training of Chinese Language teachers, young people exchanges, vocational education, etc., with a view to further upgrading the level of Philippines-China educational cooperation.