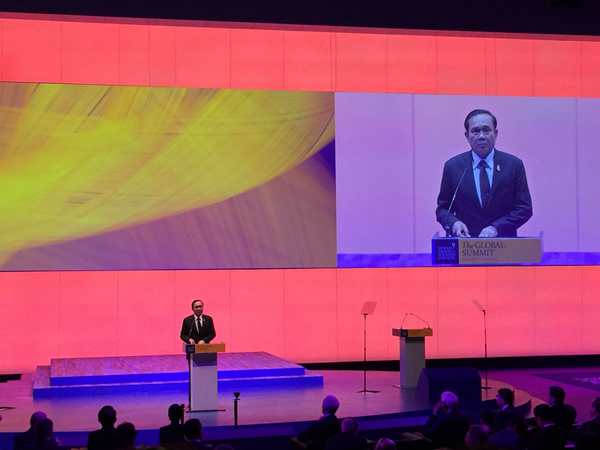 On 26 April 2017, the Opening Ceremony of the Global Summit 2017 was held in Bangkok, Thailand. The summit was hosted by WTTC and the Tourism Authority Thailand (TAT), the state enterprise under the Thai Ministry of Tourism and Sports, under the theme of “Transforming Our World”. The summit focused on travel & tourism’s power to transform economies, places and lives in line with the 2030 Agenda for Sustainable Development to contribute to a sustainable future. H.E. Prayut Chan-o-cha, Prime Minister of Thailand, Mr. Taleb Rifai, Secretary-General of United Nations World Tourism Organization (UNWTO), and Mr. Gerald Lawless, Chairman of WTTC, attended the Opening Ceremony and delivered remarks. Mr. Chen Kesong, Tourism Officer of ACC, attended the Opening Ceremony and exchanged views with representatives.

Prime Minister Prayut said that at present, tourism has become one of the largest business employers in the world, creating as many as 292 million jobs and contributing 10.2% to the world’s GDP. The tourism revenue of Thailand had risen consistently, growing 16.7% in 2015 to 1.45 trillion Baht or approximately USD 41 billion. In 2016，despite unfavorable world economic conditions, the Thai tourism sector registered an 11% growth to 2.52 trillion Baht, or about USD 72 billion, making it the country’s largest source of revenue. As of this year’s record, the accumulated expenditure in products and services invested in the tourism sector had reached 4.6 trillion Baht or approximately USD 131 billion . The tourism sector had created nearly 14 million jobs in Thailand. As an important hub of international and regional travel and tourism, Thailand had played a pivotal role in connecting and supporting tourism in the ASEAN region at bilateral and multilateral levels. The government had placed a great emphasis on “Thailand Plus One” policy which had been implemented since 2014. The objective of the strategy was to stimulate and attract a fresh injection of funds from international investors. The success of this policy would be instrumental to collaborative promotions and supports designed to increase connectivity with ASEAN Member States in the areas of commercial, transports and logistics, communications, labor movement as well as tourism.

Secretary-General Rifai said that international tourists exceeded 1.2 billion in 2016, which promoted tourism showing a strong momentum of development in the global economic downturn environment and becoming one of the important pillars of global economic development. Meanwhile, the development of various areas in the world was also facing many problems, three primary problems of which were security, technology and sustainable development. He hoped the summit could stimulate the enthusiasm of practitioners in tourism and related fields, and prompt them to solve problems, create a more comfortable tourism environment and jointly promote the development of tourism.

Chairman Lawless said that travel is one of the basic rights of human beings, and it is an important way to make the world better and more peaceful. There were three important factors to realize the sustainable development of tourism. They were people’s demand for tourism, the successful tourism enterprises and responsible industry rules. He hoped the delegates could have in-depth discussions, speak freely and promote tourism to change the world for the better.