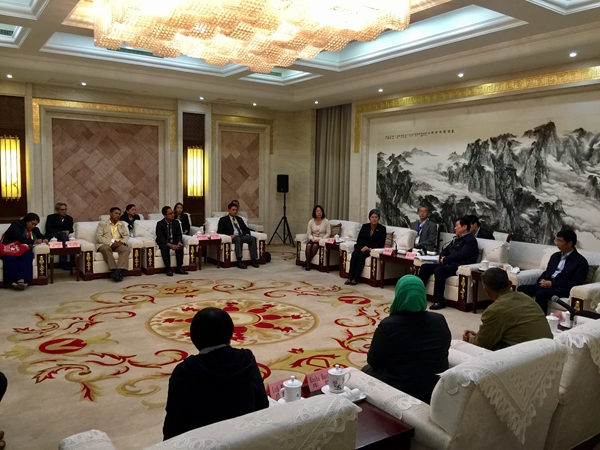 Director-General Zhao warmly welcomed the delegation, and said that Jiangxi is a province with time-honoured history, rich mineral resources, sound ecological environment, well-developed transportation networks and fast socio-economic development. As an important destination along the ancient maritime silk road, Jiangxi has played a positive role in strengthening exchanges between China and Southeast Asia since ancient times. At present, ASEAN has been Jiangxi’s largest trading partner, main source and destination of foreign investment. The two sides have vast cooperation potentials. He hoped that this visit could encourage ASEAN journalists to learn more and better publicize Jiangxi for deepening ASEAN peoples’ understandings of Jiangxi, and contributing to friendship and cooperation between both sides.

Secretary-General Yang thanked Jiangxi government for its strong supports to the visit. She opined that, ACC and the State Council Information Office have co-organized two reporting trips under the theme of “Jointly Building 21st Century Maritime Silk Road”, both of which achieved good effects. This year’s reporting trip to Central China is aimed at helping ASEAN countries to further understand about the development and achievements of, and meanwhile helping China’s different areas to know more about ASEAN so as to expand China’s exchanges and cooperation with ASEAN, and build up new platforms. She believed this trip would tighten the relations between both sides and increase the level of bilateral cooperation.

Deputy Editor-in-Chief Zhao introduced the efforts China Foreign Language Publishing Administration and China Report Magazine made for implementation of the Belt and Road Initiative to facilitate exchanges and cooperation between China and foreign media. She opined that China Report Magazine issued China Report ASEAN in 2016 aimed at making full use of new media to enhance the reports on China-ASEAN relations. China Report also held Book Fairs in Thailand, Cambodia and other ASEAN countries. China Report would continue to follow the development of Jiangxi, and make more contribution to promoting cooperation between Jiangxi and ASEAN.

Cambodian journalist thanked Jiangxi for its hospitality on behalf of the delegation. He said that the delegation would deepen the understandings of Jiangxi and China through this field trip.