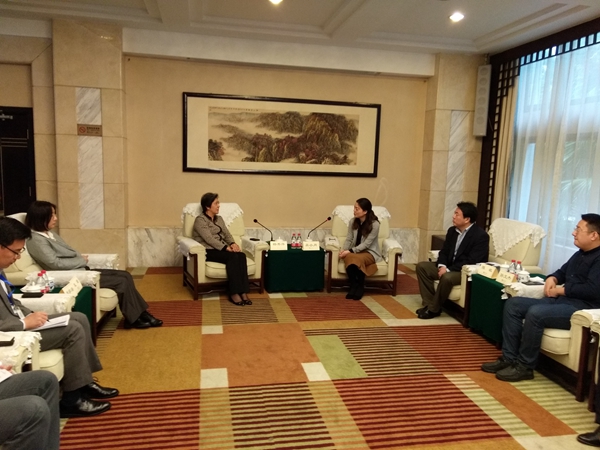 Director-General Wu warmly welcomed China-ASEAN Media media Delegationdelegation, and introduced that Xiangtan is a vitalcritical industrial base for Hunan province and even for whole China. In recent years, Xiangtan has makes made great efforts to build the National Innovation Demonstration Zone for with a view to building itself into an Intelligent Manufacturing Valley in serving its industry upgrade and city transformation, and the collective rising of Central China. Xiangtan attaches great importance to exchanges and cooperation with ASEAN countries. Seizing the opportunity of the Belt and Road Initiative, some enterprises in Xiangtan wish to develop ASEAN markets , and seek forfor more business opportunities. Under the saidsuch circumstances, the delegation’s visit would not only increase the popularity of Xiangtan in ASEAN countries for more ASEAN people to learn about Xiangtan’s industrial features and development strengths, but also create the opportunity for more ASEAN enterprises to start businesses in Xiangtan. She expected looked forward to the continued assistance and support of ACC and China Report Magazine to continue the assistances and supports to Xiangtan in its exchanges and cooperation with ASEAN countries.

Secretary-General Yang briefed the bilateral relations of between China and ASEAN and China, and the mandate and recent work s of ACC. She opined said that ASEAN is the critical directiona priority for implementing the Belt and Road Initiative. China and ASEAN have achieved positive fruitsfruitful results in jointly building “the 21st Century Maritime Silk Road”. The bilateral cooperation has brought vast potential and a bright future, which presents a promising future for both sides to further the cooperation. ACC expects hopes that the reporting trip would create opportunitiesconditions for future cooperation between ASEAN countries, and such Chinese provinces and cities as Hunan and Xiangtan as well as other parts of China.

Deputy Editor-in-Chief Zhao introduced China Report Magazine, and added that encompassing the theme of “China-ASEAN Jointly Building 21st Century Maritime Silk Road”, the State Council Information Office and ACC have consecutively co-organized several reporting trips by China and ASEAN journalists from China and ASEAN, all of which achieved prominent effects. As the host of this tripinstitution, China Report Magazine foresawexpected this trip could spur the exchanges between media of both sides, mutual understandings and interpersonal friendships of both peoples, and finally facilitate the bilateral cooperation.