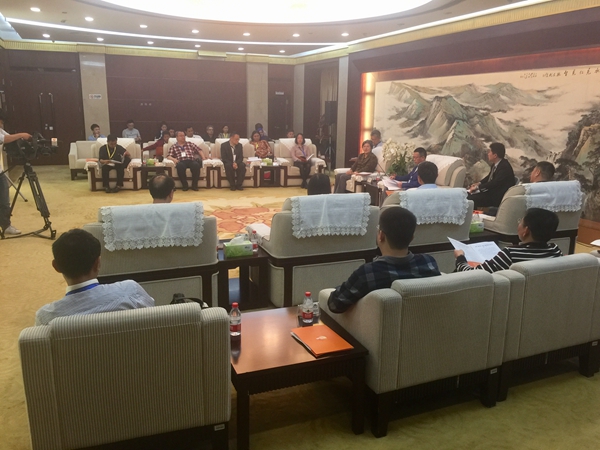 Mr. Yang Zhuang, Vice President of Hunan Broadcasting System, briefed that Hunan Broadcasting System, established in 2010, employs about 12,000 staff members, owns 10 television channels, 8 radio frequencies and 4 satellite channels including Hunan Satellite Channel which is the most innovative Chinese platform of TV and radio contents production and broadcast, and one of the most influential Chinese brands in media industry. As a result, it ranked the 80th among China’s 500 Most Valuable Brands in 2016 according to World Brand Lab, and the 112th among Asian Top 500 Brands in 2016 in which it was the second among Asian media brands.

The leaders of several affiliated departments and institutions, namely, Press Centre, International Channel, Publicity Management, Programme Trading Management, Happy Pioneer Media, Golden Eagle Media, briefed their current cooperation with ASEAN Member States. They cited that Hunan Broadcasting System has signed the agreement on live broadcast with the related institutions of Singapore, Malaysia, Thailand, etc. In ASEAN countries, their programmes gain great popularity, in which, A Worldwide Celebration: Chinese New Year, Fishing are often shot in ASEAN countries, and I am a Singer, Chinese Bridge attract increasing number of ASEAN audiences. At the opportunity of the delegation’s visit, they expected to strengthen the connections with ASEAN media and deepen mutually beneficial cooperation in cultural exchanges and cultural industries so as to draw on each other’s strengths and achieve common development goals.

Secretary-General Yang appreciated the support rendered by Hunan Broadcasting System for the Joint Interview themed “Jointly Building 21st Century Maritime Silk Road”, and outlined the efforts ACC made for fostering media cooperation of both sides. She also said that ACC would like to continue to implement leaders’ consensus and build up more conducive platforms for bilateral cultural exchanges and media collaborations so as to make more substantial contributions for 2 billion peoples’ well-being.

Deputy Editor-in-Chief Zhao briefed the efforts China Report Magazine made for facilitating China-ASEAN media cooperation, and expected both sides’ media could continuously enhance exchanges and collaborations with each other in order to play positive roles in strengthening mutual understanding and materializing the Belt and Road Initiative.

ASEAN media exchanged views with leaders of Hunan Broadcasting System on such issues as challenges and opportunities faced by media under new circumstances and potential cooperation of both sides.