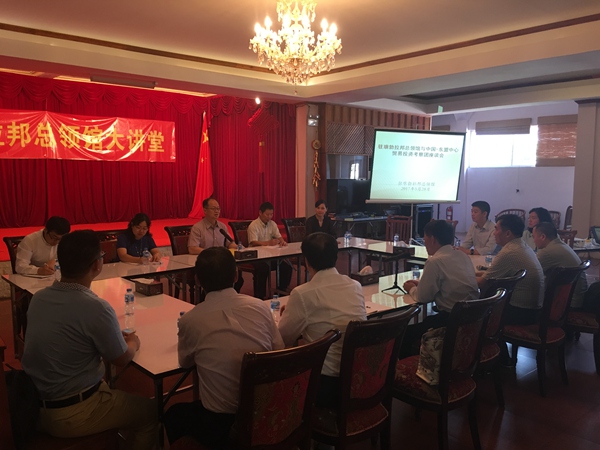 ACC organized an investment mission to Luang Prabang of the Lao PDR on 28-29 May 2017. The mission was led by Mr. Li Yuan, Director of ACC Trade and Investment Division, and joined by more than 10 representatives from enterprises from Beijing, Shandong and Guangdong provinces.

The delegation called on Mr. Li Baoguang, Chinese Consul General in Luang Prabang and had a meeting with the Chinese Consulate General. Director Li Yuan briefed ACC’s mandate and recent work. He noted that the purpose of this mission is to learn the development and relevant investment policies of Luang Prabang through field trips and provide assistance to businessmen for their investment in the Lao PDR. Consul General Li Baoguang elaborated on the investment environment of the six northern provinces of the Lao PRD and their investment policies and relevant laws and regulations. He noted that northern Laos has great potential in the areas of agriculture, livestock breeding, tourism, high-end medical care and e-commerce. He suggested that Chinese enterprises study the eighth Five Year Plan on Social and Economic Development of the Lao PDR and align their investment plans with the Lao National Development Strategy for win-win results.

The delegation had meetings with Mr. Soulisak, Director of the Provincial Administration Office of Luang Prabang, and representatives from Department of Planning and Investment, Department of Industry and Commerce and Department of Transportation. The delegation also exchanged views with the local Chamber of Chinese Enterprises. Through the meetings and discussions, they learned about the social and economic environment of Luang Prabang from different perspectives and had a deeper understanding of the local business environment. The delegation also visited a hotel project of the Yunnan Copper Co., Ltd.

Members of the delegation expressed the positive views that the trip was useful and inspiring, through which they perceived the huge potential in China-Laos trade and investment cooperation. After the trip, they would sort out their ideas and put the ideas into practice. They also thanked ACC for organizing the mission, which is very rewarding.