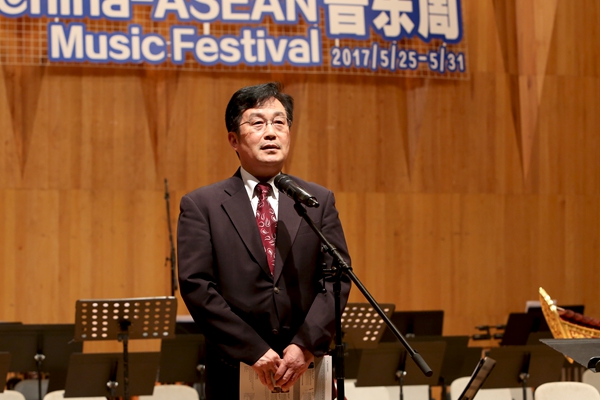 Mr. Xu Shuya expressed his appreciation of CAMW for its function as an influential exchange platform for musicians between ASEAN and China as well as between ASEAN, China and the rest of the world. Ms. Nujjaya briefed on the formation of the C-ASEAN Consonant as a special orchestra with young musicians from all ten ASEAN countries, and expressed the willingness to cooperate with GXAU and relevant institutions of both ASEAN and China, through the CAMW, to better showcase the cultural image of ASEAN. Mr. Hou Daohui recalled the development process of the CAMW, its goal and scope this year, and wish the event a great success.

Mr. Sun Jianhua cited in his opening remarks that the CAMW was not only one of the three important international music exchange platforms in China, but also an institutionalized cultural and arts exchange project between ASEAN and China. Compared with previous ones, one of the highlights of the CAMW this year was the full participation of all ten ASEAN countries and China. Year 2017 is the 50th anniversary of the establishment of ASEAN, so it was hoped that the 6th CAMW would add celebrative atmosphere with its touching melodies to the golden jubilee, in sending best wishes for the continuous deepening of ASEAN-China friendship and cooperative relations.

The 6th CAMW would last for a week, with 230 participants of composers, music critics, performing musicians of orchestras from 21 countries and regions including all ten ASEAN Member States. The event was scheduled to bring about 20 high-quality concerts, three summit forums, one piano recital competition, one contemporary music criticism contest, the annual meeting of China-ASEAN Musician Union and the Seminar and five master classes.