Secretary-General Yang Xiuping welcomed Mme. Ma and her delegation to visit ACC, and expressed her appreciation to Beijing Women’s Federation for its strong support to ACC’s work. She accompanied the delegation to tour the photo exhibition on ASEAN-China relations and the development of ACC at the ACC ASEAN Hall, and introduced ASEAN-China cooperation, the mandate and main activities ACC held in recent years. She said that women exchanges had become an important part of ASEAN-China people-to-people exchanges, and helped deepen the understanding and friendship between both sides. As an inter-governmental organization co-founded by the governments of China and ASEAN Member States, ACC proactively promoted ASEAN-China exchanges and cooperation in all-around fields including women cooperation. In recent years, ACC attended and organized several women’s activities which gained good effects. This year marked the 50th anniversary of the founding of ASEAN. The development of ASEAN-China relations enjoyed new historical opportunities. ACC would continue to play the role as bridge between the two sides, and make full use of self-advantages to push forward the practical cooperation between ASEAN and China. ACC looked forward to strengthening the connection with Beijing Women’s Federation to help it find links in cooperation with ASEAN countries, so as to make contribution to ASEAN-China people-to-people exchanges. 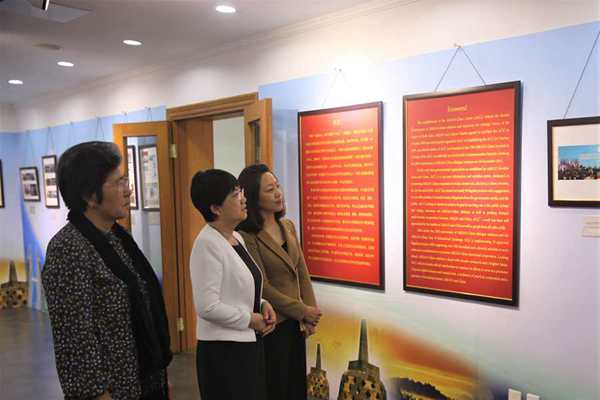 Mme. Ma Lanxia thanked Secretary-General Yang Xiuping for the warm reception. She highly appraised ACC’s achievements in promoting ASEAN-China cooperation. She briefly introduced the main duty and work of Beijing Women’s Federation, and said that both sides have a lot in common in accelerating economic development and pushing forward people-to-people exchanges and cooperation. She hoped to enhance the cooperation with ACC in future, and to form synergy between Beijing Municipality and ASEAN countries in promoting women communication and sustainable development, so as to push forward ASEAN-China women’s work.