The Third Delegation of Officials from Mekong Countries Visited Tianjin The third delegation of officials from Mekong countries, upon the invitation of ASEAN-China Centre, visited Tianjin from 28 to 29 June 2017.

The delegation paid a visit to the Foreign Affairs Office of Tianjin Municipal People’s Government. Mr. Yang Guobiao, Director-General of the Foreign Affairs Office, said as one of the four Municipalities directly under the central government and an important port city in China, Tianjin has been experiencing fast economic and social development in recent years. Tianjin attaches great importance to the friendly exchanges with Mekong countries as well as other ASEAN countries and maintains good exchanges and cooperation in areas of trade, investment, vocational education, people-to-people exchanges and so on Tianjin has established sister city relations with several cities in Mekong countries, namely, Phnon Penh of Cambodia, Bangkok of Thailand and Haiphong of Viet Nam. Tianjin is actively taking part in the Belt and Road Initiative and vigorously conducting cooperation in multimodal transportation with relevant countries. Tianjin would continue to harness its advantages and expand practical cooperation with provinces and cities of Mekong countries and other countries along the Belt and Road and hoped to get continuous support from ACC. The delegates were very pleased to learn the achievements of Tianjin in its economic and social development. They said that the Lancang-Mekong Cooperation Mechanism has provided new opportunities for both sides to deepen cooperation at the provincial level and hence, they expected to further strengthen the friendly exchanges and cooperation with Tianjin. The delegation visited Tianjin Chentang Thermal Power Plant, Tianjin Tianfang Investment Holding Co., Ltd. and Tianjin Textile Museum where they tried dyeing by themselves. Mr. Zhu Shaowen, Manager of the Electric Power Department of Tianjin Energy Investment Group Limited, briefed the delegation on the group’s main business and history. Mr. He Lianqun, General Manager of Chentang Thermal Power Company, said that as a wholly owned subsidiary of Tianjin Energy Investment Group Limited, Tianjin Chentang Thermal Power Company owns the largest gas power generator in Asia which has completely replaced the coal power with gas power and has made important contribution to adjusting the energy structure, reducing the use of coal and improving the environment of Tianjin. Mr. Wang Jian, President of Tianjin Tianfang Investment Holding Co., Ltd. made an introduction of the company’s advantages and said as a large scale state-owned enterprise in Tianjin, the company takes the Strategy of Coordinated Development of the Beijing-Tianjin-Hebei Region and the Belt and Road Initiative as important opportunities, striving to realize the industrial transformation and upgrading, with an aim to be a modern textile enterprise of multidisciplinary, multiple formats and diversified development in the future. The company wished to expand cooperation with ASEAN countries. The scale and advanced technology of the Chentang Thermal Power Plant left the delegates deep impression. They mentioned that Cambodia, Lao PDR and Myanmar are in great need of power to develop the economy and wish to further deepen mutually beneficial cooperation with China in energy field. Some delegates introduced the preferential investment policies of their countries and welcomed Tianjin Textile to visit the Mekong countries for future cooperation. 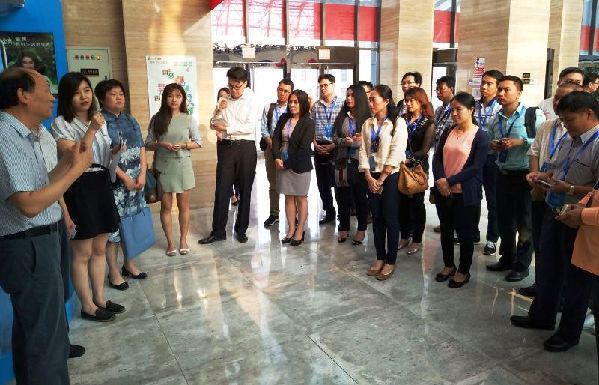 The delegation also visited Tianjin Sino-German University of Applied Science (TSGUAS) and paid field visits to the training and practice sites of numerical control, new energy and in-flight service. Ms. Zhang Jingguo, Vice President of TSGUAS said that as the first university of applied science approved by Chinese government, the university attaches importance to international exchanges and has achieved fruitful results in joint programmes, exchanges of foreign students, vocational education, etc. The university actively implements the consensus reached by the leaders at the first Lancang-Mekong Cooperation Leaders’ Meeting and is currently building the Lancang-Mekong Vocational Training Centre at the National Polytechnic Institute of Cambodia, which is scheduled to unveil in early 2018. TSGUAS is committed to build the centre as an international vocational training centre that operates in Cambodia, serves all five Mekong countries and radiate to the 10 ASEAN Member States at large. Vice President Zhang also briefed the delegation on the efforts of the university to take part in the Belt and Road Initiative and the overall students enrollment from Mekong countries. She welcomed more ASEAN students to study at the university. The delegation spoke highly of the achievements TSGUAS made at vocational education and its efforts to push forward Lancang-Mekong Cooperation. They expressed the willingness to strengthen ties with the university and actively expand cooperation in areas like students exchange. They hoped the training centre could cultivate more professionals for this region.