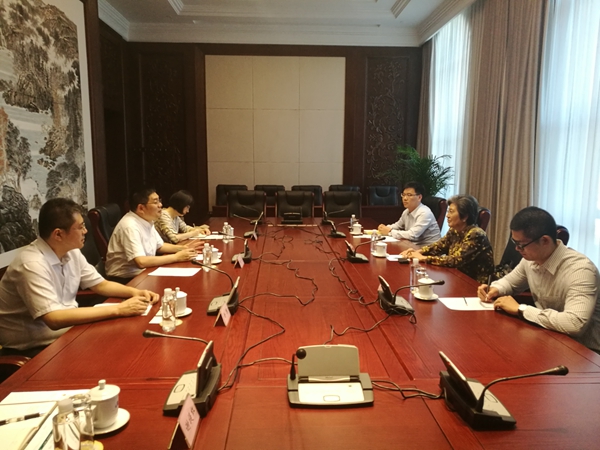 Deputy Director-General Tang briefed socio-economic development and foreign exchanges of Chongqing. He cited that Chongqing, as an economic hub located in the upper stream of Yangtze River, attaches significance to opening itself to the world in which it has gained fruitful achievements through close relations with ASEAN countries in several fields, namely trade, education and tourism. Chongqing has established Sister City/Province relations with Phnom Penh of Cambodia, Chiang Mai and Bangkok of Thailand, and Java of Indonesia. In addition, Cambodia and the Philippines have set up Consulates-General in Chongqing, and Vietnamese Trade Promotion Agency affiliated with Ministry of Industry and Trade established an office in Chongqing. Sino-Singapore (Chongqing) Demonstration Initiative on Strategic Connectivity is moving forward smoothly. Chongqing ASEAN International Logistics Park, ASEAN-China (Chongqing) Home and Living Expo and other projects have made tremendous contributions to ASEAN-China practical cooperation. The universities in Chongqing also conducted efficient collaborations with their counterparts in Thailand, Indonesia, Singapore and other ASEAN countries through Confucius Institutes, joint programmes, training and mutual visits. The Office recognizes that ACC is an important mechanism for promoting ASEAN-China friendly exchanges and practical cooperation. The Office looks forward to enhancing the connections with ACC in order to raise exchanges and cooperation between Chongqing and ASEAN countries to a new level.

Secretary-General Yang outlined ASEAN-China relations, and mandate and recent work of ACC. She stated that ACC, as an intergovernmental organization co-founded by ASEAN Member States and China, attaches great importance to implementing leaders’ consensus of both sides, and pushes forward practical cooperation in trade, investment, education, culture, tourism and media. Encompassing the 50th anniversary of ASEAN and the ASEAN-China Year of Tourism Cooperation, ACC is actively carrying out 19 flagship projects. Local exchanges and collaborations is an important driving force for deepening ASEAN-China relations. Chongqing, being a national hub and the only municipality in Midwest China, has a solid foundation and promising future in deepening exchanges and cooperation with ASEAN countries. ACC would continue to serve as a bridge and bond to link Chongqing with ASEAN so as to bring tangible benefits to both peoples.