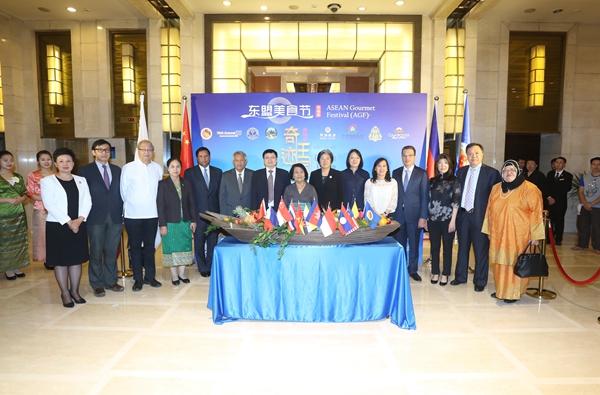 On 5 June 2017, the 2nd ASEAN Gourmet Festival-Cambodia: Kingdom of Wonder Theme Month, jointly sponsored by ASEAN-China Centre (ACC), the Royal Embassy of Cambodia in Beijing and Beijing Tourism Group (BTG) and supported by the Ministry of Tourism of Cambodia, was officially opened in Beijing Minzu Hotel. 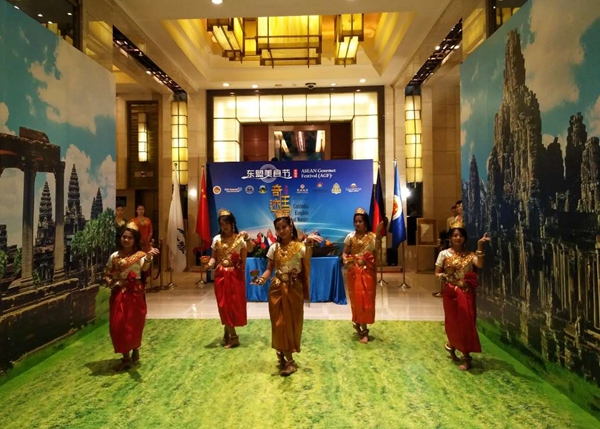 Secretary-General Yang Xiuping said that 2017 marks the 50th anniversary of ASEAN and the ASEAN-China Tourism Cooperation Year, which has brought new opportunities to the development of ASEAN-China relations. ASEAN countries all took an active part in the Belt and Road Forum for International Cooperation, which produced fruitful results and injected new impetus to promoting people-to-people connectivity and deepening practical cooperation between China and countries along the route. Cambodia is renowned for its rich history and the unique Khmer culture, and people’s friendship between Cambodia and China has been deeply rooted. She hoped that this gourmet festival could make new contributions to deepen Cambodia-China and ASEAN-China cultural exchanges and to jointly build the Belt and Road, being a new highlight in commemoration of the 50th anniversary of ASEAN and in the publicity of the ASEAN-China Year of Tourism Cooperation.

Ambassador Khek Caimealy expressed her appreciation to ACC for co-hosting this festival and congratulated on the successful convening of the Belt and Road Forum for International Cooperation held in Beijing, which provided a useful platform for participating countries to share views, strengthen communications and promote practical cooperation. She said last year marked the 25th anniversary of ASEAN-China dialogue relations, which had enhanced good neighbourliness, mutual benefit and common development. This year marks the 50th anniversary of ASEAN and the ASEAN-China Year of Tourism Cooperation. It is hoped that the close relations of friendship and cooperation between ASEAN and China would continue to develop in the years to come. Cambodia is an attractive tourist destination with delicious food and considers tourism sector as ‘green gold’ industry which drives national economy. Cambodia would like to join other countries in promoting Mekong River sub-regional cooperation and jointly build the Belt and Road. 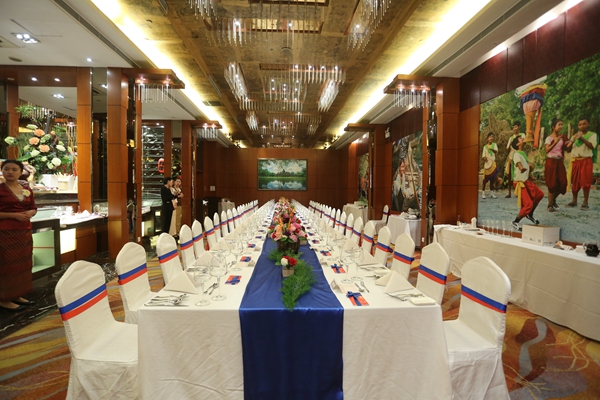 Mr. Bai Fan hoped this Cambodia food promotion event could enhance mutual understanding and friendship and serve as a way to promote the belt and road cooperation. Mr. Duong Panhavuth expressed his confidence that this festival could enhance the profile of Cambodian food and culture in China and build a new platform to showcase the rich and diverse culture of ASEAN, in particular Cambodia, to the Chinese people.

After the opening ceremony, all the participants tasted Cambodia food and watched Cambodian performances. The 2nd ASEAN Gourmet Festival will last till 30 June, presenting not only Cambodian cuisine, but also performing arts, traditional handicrafts, clothing fashion and the unique features of its tourism.