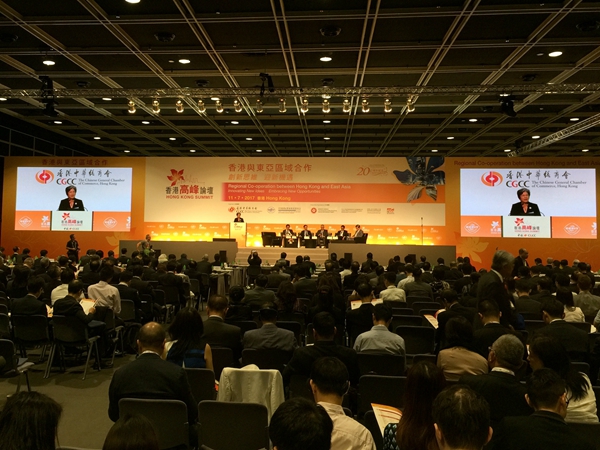 On 11 July 2017, H.E. Mme. Yang Xiuping, Secretary-General of ASEAN-China Centre (ACC), attended the Hong Kong Summit at invitation, and delivered a speech at the Plenary Session: Dialogue between East Asian Ministers and Regional Organizations’ Leaders on promoting free trade and regional collaboration, and interacted with the participants.

In her remarks, SG Yang stated that with the development of economic globalization, information application and cultural diversity, countries are highly interconnected. An East Asia cooperation network has taken shape with ASEAN at its core. Mechanisms such as ASEAN+1, ASEAN+China, Japan and R.O.K. and East Asia Summit have grown from strength to strength and reinforced each other, which has laid a solid foundation for regional integration. ASEAN and China are important forces in promoting free trade and regional integration. ASEAN-China relations are the most active and robust among the relations between ASEAN and its dialogue partners. ASEAN-China cooperation has given a strong boost to the economic and social development of both sides, and made great contribution to the stability and prosperity of the region.

SG Yang said that as the Belt and Road Initiative has been progressed steadily, the ASEAN Community was established, the upgrading of ASEAN-China Free Trade Area took effect and the Lancang-Mekong Cooperation mechanism has made good headway, the free trade and regional integration in East Asia are embracing new opportunities. However, the world economic recovery is not on a solid footing. The resurging protectionism in some countries and regions has affected the process of free trade. Facing the opportunities and challenges, East Asian countries should strengthen dialogue and make joint efforts.

SG Yang said that Hong Kong is an international metropolis with rich high-end resources and a high level of openness to the outside world. It plays an important role in the value chain of global economic and social development and cultural exchanges. With the strong backing of the Central Government of China, Hong Kong actively participated in regional cooperation, including negotiating with ASEAN on free trade agreement, taking part in the multilateralization process of Chiang Mai Initiative, and engaging in the building of the Belt and Road. With these efforts, Hong Kong has built closer ties and gained greater influence around the world. Hong Kong became an official member of the Asian Infrastructure Investment Bank. It is believed that Hong Kong will play an even bigger role in regional and global economic affairs.

SG Yang expressed her appreciation to Hong Kong Chinese Chamber of Commerce and Chairman Dr. Jonathan Choi himself, for their tireless efforts to promote Hong Kong’s external trade and economic cooperation, especially with ASEAN. She said that ACC is ready to work with all parties, including Hong Kong Chinese Chamber of Commerce, to make bigger contributions to the continuous development of East Asia economic integration.