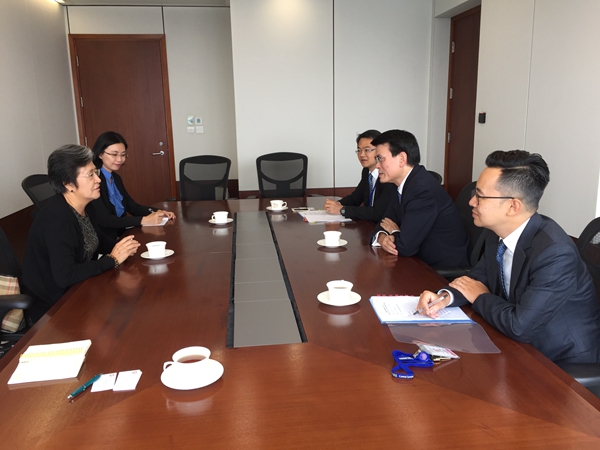 Secretary-General Yang congratulated Secretary Yau for assuming the new post, and highly commended the achievements of Hong Kong in socio-economic development as well as external exchanges and cooperation over the past two decades since it returned to China. Secretary-General Yang outlined ASEAN-China relations and the efforts ACC made for practical cooperation in two-way trade, investment, tourism and other fields. She stated that ASEAN-China cooperation has been deepened and achieved concrete outcomes since the launch of dialogue relations in 1991. In 2016, the two-way trade volume reached USD 452.2 billion, and two-way accumulated investment amounted to approximately USD 180 billion, and mutual visits of tourists topped 32 million. Hong Kong and ASEAN countries enjoy geographical proximity, cultural affinity and frequent exchanges. At present, both sides have been actively pushing forward the negotiations on a free trade area, which would bring broader cooperation prospects. Seizing the opportunity of the 50th anniversary of ASEAN and the Year of China-ASEAN Tourism Cooperation, ACC would maintain close contacts with relevant agencies of Hong Kong including the Bureau, and continue to help connect Hong Kong with ASEAN to enhance practical cooperation in trade, tourism and other fields so as to raise ASEAN-China relations and ASEAN-Hong Kong relations to a new level.

Secretary Yau briefed Hong Kong’s foreign trade and tourism industry, and highly acclaimed the efforts ACC made for bilateral friendly exchanges and cooperation. He cited that Hong Kong as a special administrative region plays a unique role in China’s opening-up to the outside world. Hong Kong government attaches great importance to the Belt and Road Initiative, and has already tasked the Bureau to coordinate relevant businesses. This year, Hong Kong would again organize a Belt and Road summit to increase contacts with countries along the route with a focus on business matching between the business entities. ASEAN is the second largest trading partner of Hong Kong and an important partner for Hong Kong to implement the Belt and Road Initiative. Both sides are steadily pushing forward the negotiations on a free trade agreement. The Bureau would like to continue to strengthen contacts with ACC, and utilize the platform of ACC to continuously expand friendly exchanges and practical cooperation with ASEAN countries so as to reach win-win results and bring benefits to the people.