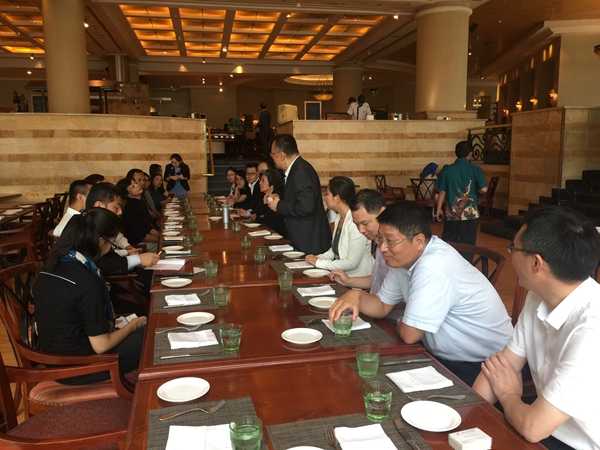 Both sides’ journalists respectively briefed on their own news agencies and exchanged views on China and Indonesia’s socio-economic development and cooperation in trade, tourism, education, culture and other fields. Indonesian journalists stated that with fast development of Indonesia-China relations and ASEAN-China relations particularly the ever-deepening cooperation in trade, culture and other fields, Indonesian media have greater interests in Indonesia-China relations and expect to learn more about China’s socio-economic development and Chinese traditions and cultures. New media in Indonesia is developing fast and the number of subscribers to new media is surging which has brought challenges to traditional media like newspaper and TV. Therefore, Indonesian traditional media must pay more attention to improving report quality and getting closer to the local community. At the same time, the traditional media is expediting their transformation in line with the trend of the market development to better serve the needs of the people.

Ms. Rini, senior reporter from Antara News Agency who used to work as a resident correspondent in China , and Mr. Aditya, reporter from Antara News Agency who took part in the reporting trip organized by ACC in 2016 highly commended the enormous efforts ACC made for mutual exchanges and cooperation between both sides’ media. They said that they were tremendously benefited from the events held by ACC, through which they deepened understanding on China and friendships with Chinese counterparts. This reporting trip to Indonesia and the discussions in Jakarta organized by ACC provide a great platform for them to share working experience and feelings, and enhance exchanges and cooperation. They expected ACC could organize more events like this and offer more opportunities for both sides’ media to have face-to-face exchanges.

Secretary-General Yang outlined the recent work of ACC and the reporting trip to Indonesia. She encouraged both sides’ journalists to play the role of media in promoting international relations and people-to-people exchanges and continue to report Indonesia-China relations and ASEAN-China relations with objectivity and fairness so as to create a good atmosphere of public opinions and gain more public support for the development of bilateral relations.