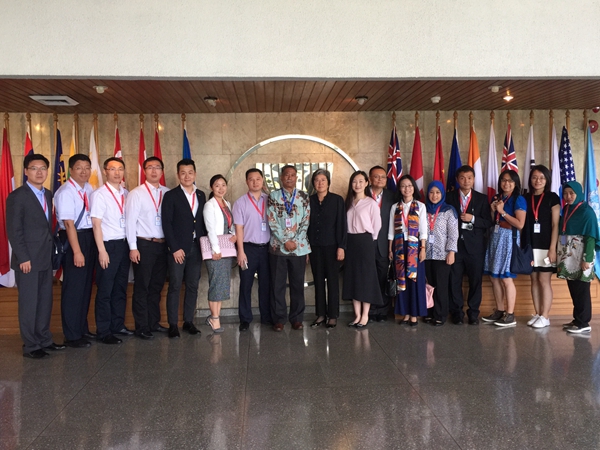 On ASEAN community building, Deputy Secretary General Mochtan stated that today’s Southeast Asia has achieved notable progress compared with the time when ASEAN was established in 1960s. The most important achievement is the realization of regional peace which is also the biggest outcome reached by ASEAN Political-Security Community. Over the past 50 years, ASEAN has achieved rapid socio-economic development, educational and cultural progress and dynamic foreign exchanges. ASEAN’s success is benefited from the ASEAN Way of consensus-building, ASEAN centrality, and the spirit of openness and inclusiveness. ASEAN dedicates itself to building a people-oriented community, and making efforts to narrow internal development gaps with the aim to let all member states be able to share development opportunities and reach common prosperity. On ASEAN-China relations, Deputy Secretary General Mochtan reiterated that ASEAN Member States shared close bond with China in history, culture and religion. Over the past 26 years since ASEAN and China dialogue relations, both sides achieved fruitful outcomes in political, trade, culture and other fields. ASEAN Member States actively involve themselves in the Belt and Road Initiative and Asian Infrastructure Investment Bank to deepen their cooperation with China, and push forward regional cooperation. The upgraded ASEAN-China Free Trade Area has taken effect. Both sides are in negotiation on Regional Comprehensive Economic Partnership. The bilateral cooperation platforms like China-ASEAN Expo have gained notable progress. The bilateral cooperation mechanisms in education, culture, tourism and other fields are improving. All these efforts open up a broader prospect for bilateral cooperation. Thus, both sides should join hands and seize the opportunities to raise bilateral cooperation to new levels. He hoped that the Chinese journalists could make full use of this reporting trip to follow up ASEAN development and convey good stories of ASEAN-China friendly cooperation to the Chinese people in order to make new contributions to in-depth and sustainable development of ASEAN-China relations.

Secretary-General Yang appreciated the supports and hospitality ASEAN Secretariat rendered to the delegation and highly commended the achievements in ASEAN community building and ASEAN-China practical cooperation. She opined that ACC would like to contribute to the 50th anniversary of ASEAN and the ASEAN-China Year of Tourism Cooperation by organizing this reporting trip in order to play a positive role in deepening mutual understanding and friendship between the peoples and in promoting ASEAN community building and ASEAN-China relations.