“Impression of ASEAN: An Exhibition of Landscape Paintings by Teachers of China Academy of Art” Opened in Hangzhou 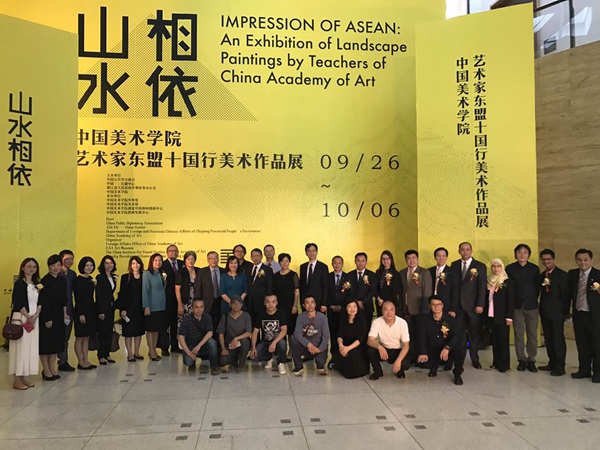 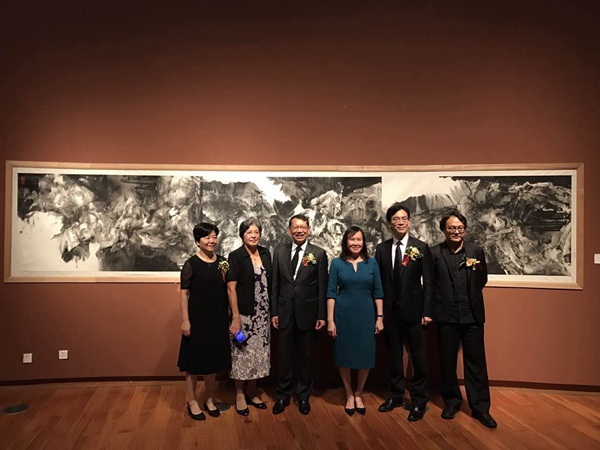 Secretary-General Yang in her remarks appreciated the efforts made by co-hosts in organizing the event and the supports of ASEAN Beijing Committee and Consulates General of ASEAN Member States in Shanghai. She briefed on achievements of ASEAN-China relations, and stated that 2017 marks the 50th anniversary of ASEAN and the ASEAN-China Year of Tourism Cooperation, which bring new opportunities to ASEAN-China relations. Jointly building the Belt and Road has been a bright spot for both sides’ cooperation. ASEAN countries and China attach great importance to cultural and art exchanges and cooperation, people-to-people exchanges, and building projects for mutual understanding and friendship. Through over 300 works in this exhibition, we could not only appreciate the beautiful landscapes and colourful customs of ASEAN countries, but also feel the goodwill of Chinese artists to ASEAN countries and peoples. She believed this event would be a bridge and bond for promoting civilizations, cultural exchanges and friendships, and a bright spot for the 50th anniversary of ASEAN and the ASEAN-China Year of Tourism Cooperation. She said that year 2018 would mark the 15th anniversary of ASEAN-China Strategic Partnership. At the ASEAN-China Foreign Ministers’ Meeting in this August, all foreign ministers welcomed the proposal to designate the year 2018 as the

ASEAN-China Year of Innovation Cooperation. ACC stands ready to work with all parties to keep abreast of the times and make even bigger contributions to ASEAN-China practical cooperation.

Ambassador Yu Hongyao stated that China Public Diplomacy Association organized artists of China Academy of Art for sketching trips to ASEAN last July. Capturing wonderful moments with their passion and talents, the artists painted a great number of works reflecting the beautiful landscapes and colourful customs of ten ASEAN countries. With the proposals of the Belt and Road Initiative and Asian Infrastructure Investment Bank, the bilateral cooperation between ASEAN countries and China is ever-more closer in line with the principle of wide consultation, joint contribution and shared benefits. Today’s gathering with ASEAN diplomats in Hangzhou for Chinese artists’ works would spread ASEAN-China friendship far away to both sides and make contribution to China’s public diplomacy.

H.E. Ms. Magdalene Teo represented ASEAN to state in her remarks that 2017 marks the 50th anniversary of ASEAN. China is the largest trade partner of ASEAN. ASEAN countries are actively participating in the joint building of the Belt and Road. Besides political and economic cooperation, both sides also recognize the importance of people-to-people exchanges, which is helpful for promoting mutual understanding and friendship between peoples. She said that art is beyond the boundaries, and connects peoples with different nationalities and cultural backgrounds. She thanked China Academy of Art for organizing artists to ASEAN to learn about ASEAN’s colourful customs and arts. She believed that the exhibition would enhance mutual understanding and art exchanges.

Deputy Director-General Gu Jianxin stated in his speech that with the joint building of the Belt and Road, Zhejiang enjoys ever-more frequent high-level exchanges with ASEAN countries, and deepening as well as expanding cooperation in trade, investment, education, culture, tourism and local exchanges. Cultural and art exchanges are important approaches for ASEAN and China to deepen friendship. The exhibition would play a positive role in expanding both sides’ cultural exchanges, and enhancing mutual understanding. Furthermore, it would also be a good example for Zhejiang deepening cultural and art exchanges with ASEAN countries. He wished that Chinese academic institutions could seize the opportunity of this event to make full use of its strengths and features to explore new more models and new patterns of bilateral cooperation, and make even more contributions to ever-lasting friendship and all-around cooperation between ASEAN and China under the guidance of ASEAN-China cooperation mechanisms.

Vice President Wang Zan, Prof. Liu Haiyong and representative of artists of China Academy of Art, briefed on the works presented in the exhibition in their speeches. They said that the theme of the exhibition not only illustrated the physical connections by mountains and waters, but also the psychological bonds of neighbourhood. In 2016, the academy selected 21 artists in 5 groups to ASEAN countries for sketching and exchanges. They were majored in different disciplines and thus presenting styles were different. All these artists had extensive exchanges with local counterparts during the trip. At the same time, artists from Brunei and other ASEAN countries also visited China for the same purpose. The trips not only brought back the source materials of tropical areas and ten ASEAN countries’ traditions and cultures, but also the friendly sentiments of ASEAN peoples since the ancient times.

After Party Secretary Qian declared the opening of the exhibition, the delegation appreciated the works and interacted with artists. All the viewers expressed their deep impression by the works, and commended the exhibition as a grand banquet for entertaining their pleasures. They expected to further strengthen the exchanges and cooperation between China Academy of Art and its ASEAN counterparts, and make new contributions to promote people-to-people exchanges.