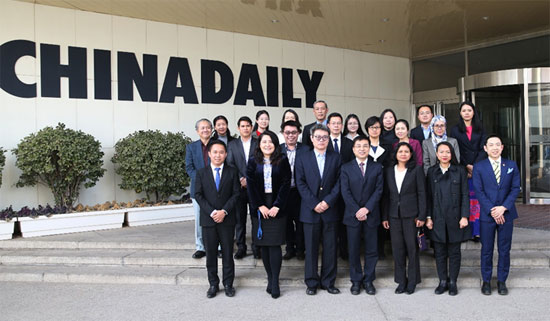 On 27 February 2019, ASEAN-China Centre (ACC) organized a Media Familiarization Trip to China Daily. Officials in charge of media affairs from embassies of Cambodia, Indonesia, Lao PDR, Malaysia, Myanmar, the Philippines, Singapore, Thailand and Viet Nam, and a journalist from the Star of Malaysia, participated in the event.
The delegation had a discussion with the management of China Daily and Chinadaily.com.cn. Mr. Wang Zhiquan, Deputy Director of Information and Public Relations Division of ACC, said that media cooperation between ASEAN and China enjoys good basis and broad prospects. ACC is committed to making positive efforts to promote in-depth exchanges and cooperation between media of both sides. Mr. Ratthawoot Nanthaikuakool, First Secretary of Thai Embassy in China, said that the visit was the first media exchange activity attended by the ASEAN embassies since the launch of ASEAN-China Year of Media Exchanges. As the rotating chair of ASEAN, Thailand will continue to push forward the media cooperation between the two sides under the theme of “advancing partnership for sustainability”. Mr. Wang Hao, Deputy Editor-in-Chief of China Daily, warmly welcomed the delegation and thanked ACC for providing an opportunity for communication and exchange, through which he hoped to strengthen cooperation with the ASEAN media counterparts. Mr. Chen Zhiming, Deputy Director of Editor’s Office of China Daily, briefed the delegation on China Daily’s experience in media integration and international communication capacity building. The ASEAN officials had further discussions with China Daily side on strengthening content cooperation and participating in relevant offline activities. The delegation also toured around the editor’s hall and exchanged with Chinese and foreign staff of China Daily.
All the participating ASEAN officials and journalists thanked ACC for organizing the trip. They stated that as the national English newspaper, China Daily is among the most influential media in China, and is an important channel for information exchanges between China and the rest of the world. This visit helped them deepen understanding on Chinese media and could lead to more media exchanges and cooperation in the future, thus making greater contributions to the cultural and people-to-people exchanges between China and the ASEAN countries.