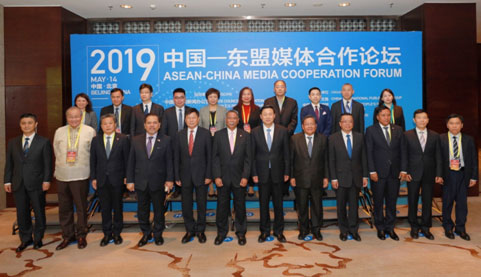 On 14 May, the 2019 ASEAN-China Media Cooperation Forum co-organized by China International Publishing Group (CIPG), Mission of the People’s Republic of China to ASEAN and the ASEAN-China Centre (ACC) opened in Beijing. Mr. Guo Weimin, Vice Minister of State Council Information Office (SCIO), Dr. AKP Mochtan, Deputy Secretary-General of ASEAN, Mr. Du Zhanyuan, President of CIPG, Mr. Huang Xilian, Ambassador of the People’s Republic of China to ASEAN, Mr. Kem Gunawadh, Secretary of State of the Ministry of Information of Cambodia, Mr. Chen Dehai, Secretary-General of ACC, Mr. Djauhari Oratmangun, Indonesian Ambassador to China, Mr. U Thit Linn Ohn, Myanmar Ambassador to China, Mr. Jose Santiago Sta. Romana, Philippine Ambassador to China, Mr. Tian Yuhong, Executive Secretary of All-China Journalists Association (ACJA), Ms. Chen Shi, Deputy Editor-in-Chief of CIPG and President of the China Report Press, Mr. Thepchai Yong, President of Confederation of ASEAN Journalists and representatives from government, media, academia, business community of China and ASEAN countries and representatives from international organization, attended the event.
The theme of the forum was “New Trends, New Cooperation, New Future”. Participants exchanged views on how the Chinese and ASEAN media should actively harness new technology to lead media innovation, promote dialogue and exchanges among different civilizations and work together to usher in the new future of cooperation and development.
Vice Minister Guo Weimin stated that China hoped to work together with all relevant parties of ASEAN within the framework of ASEAN-China Year of Media Exchanges to strengthen media cooperation and people-to-people exchanges and deepen the ASEAN-China strategic partnership. He hoped media from two sides could continue their efforts to advocate peace, stability and win-win cooperation in Asia,  and lift the media innovation, exchanges and cooperation to a new level.
Deputy Secretary-General Mochtan said that today’s world has witnessed great changes in the media landscape and leapfrog progress in media technology  which enables audience to engage in news-making process. In the multimedia era, it’s imperative for media outlets to upgrade skills and make diverse news products to attract a wider readership.
President Du Zhanyuan mentioned that media from ASEAN countries and China should make efforts in three aspects to strengthen cooperation and exchanges and tell stories of promoting peace and seeking common development. First, to focus on long-term friendly cooperation and forging a mechanism for regular regional cooperation and exchanges. Second, to stress on promoting win-win development and gathering the positive energy of ASEAN-China cooperation. Third, to emphasize on addressing challenges brought by new technology and fostering a new landscape of high-level international communication so as to make greater contributions to the steady and long-term development of ASEAN-China strategic partnership.
Ambassador Huang Xilian noted that at present, the strategic mutual trust between ASEAN and China has reached a new height, the economic and trade cooperation has reached a new level, the BRI cooperation has entered a new stage, the cultural and people-to-people exchanges have gained new momentum, and bilateral relations has been further expanded. He hoped to see media cooperation between ASEAN and China be constantly deepened to contribute wisdom and energy to the building of a higher level of ASEAN-China strategic partnership.
Secretary of State Kem Gunawadh said that under the new circumstances that the BRI cooperation has achieved fruitful outcomes, it is crucial to strengthen ASEAN- China media cooperation to promote practical cooperation and exchanges across the board. He believed the forum could be a source of inspiration for both sides.
Secretary-General Chen Dehai stated that ASEAN and China share geographical proximity, cultural affinity and similar stage of development. The people of both sides share common aspiration for peace, prosperity and development. The media should focus on the two sides’ efforts to pursue development through cooperation, and the two peoples’ endeavor to make dreams come true, demonstrate the economic and social development achieved through cooperation. The media should gather positive energy for regional development and convey to the world the confidence and aspirations of ASEAN countries and China for development of peace, cooperation and mutual benefit in an accurate and comprehensive way.
Philippine Ambassador Romana believed that people-to-people exchanges play a fundamental role in promoting friendship and mutual understanding among peoples. As all ASEAN Member States are active participants of China’s Belt and Road Initiative, the media should get the messages across to the rest of the world that the BRI will benefit all as countries strive to achieve development goals.
CAJ President Thepchai Yong noted that how to achieve sustainable development is a daunting task faced by most countries in the region. He suggested the media cooperation focus on sharing the experience of different countries in pursuing sustainable development to encourage countries learn from each other for common development.
Mr. Thonglor, President and Editor-in-chief of Vientiane Times of Lao PDR, said that the media of two sides should work together to promote regional integration and present the region as an integral whole to the international community.
Media management members, journalists and think-tank representatives from China and 10 ASEAN countries, focusing on the two topics of “Open a New Stage for ASEAN-China Media Cooperation” and “Create a New Future for Media Integration”, held in-depth discussions on how the media of two sides can play a greater role in promoting exchanges, cooperation and people-to-people exchanges by keeping up with the new trend brought by new technology. All speakers noted that cooperation is needed more than ever for media from different countries to adapt to the new landscape shaped by new technology. As the ASEAN-China relations have entered a new stage of all-round development, media of both sides should step up efforts to advocate the concept of openness, inclusiveness, mutual benefit and win-win results, pay more attention to people's livelihood, report in a fair and objective manner, spread positive energy, and tell stories of friendly exchanges and mutually beneficial cooperation between China and ASEAN countries.
During their stay in China, the ASEAN media delegation also attended the Conference on Dialogue of Asian Civilizations and visited Ningxia Hui Autonomous Region and Sichuan Province.