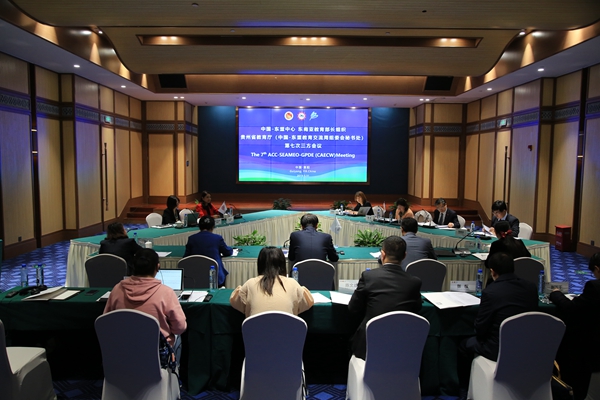 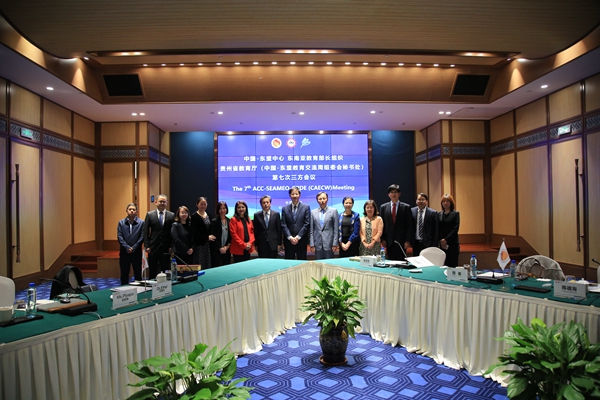 During the meeting, the three parties reviewed the 11th CAECW, shared the proposed activities to be held during the 12th CAECW, and explored ways on how to integrate the resources of the three parties towards building a long-term cooperation mechanism.

Secretary-General Chen Dehai expressed his gratitude to GPDE and SEAMEO for their long-term support and cooperation, and commended the outcomes of the 7th tripartite meeting. He pointed out that the meeting reinforced the ties and cooperation among the three parties and set clear direction for the preparation of the 12th CAECW. He hoped that all parties would keep close communication and jointly work to implement the consensus reached at the meeting, and achieve more practical outcomes in ASEAN-China education cooperation, so as to make greater contributions to the building of an even closer ASEAN-China community with a shared future.

After the meeting, Secretary-General Chen had a field trip to Guizhou Light Industry Technical College and Guizhou University of Traditional Chinese Medicine, where he visited relevant schools, research centres and training bases, exchanged views with faculty staff and students, and learned about the overall situation on discipline development and talent cultivation, etc.

Since 2013, ACC, SEAMEO and GPDE have held tripartite meetings annually to discuss on the design of activities of the CAECW in that year. The trilateral meeting has become an important consultation mechanism for the preparation of CAECW. Themed with “Deepening Practical Cooperation and Sharing Development Achievements”,the 12th CAECW will be convened from 22 to 26 July 2019 in Guiyang.