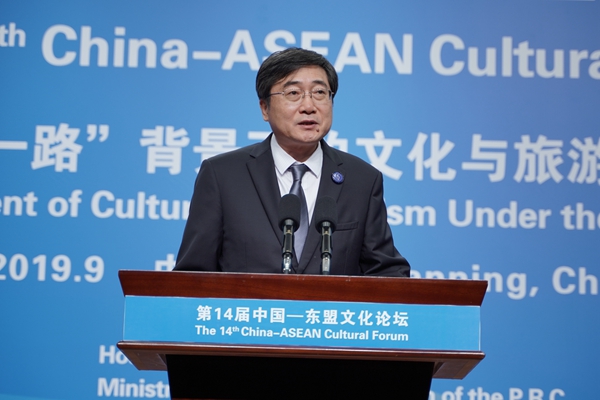 The 14th China-ASEAN Cultural Forum was opened in Nanning, Guangxi Zhuang Autonomous Region on 20September 2019. With the theme of “Integrated Development of Culture and Tourism under the Belt and Road Initiative”, the forum was co-hosted by the Ministry of Culture and Tourism of China and the People’s Government of Guangxi Zhuang Autonomous Region, with ASEAN-China Centre (ACC) as the co-organizer.

Mr. Zhang Xu, Vice Minister of the Ministry of Culture and Tourism of China, Ms. Fan Xiaoli, Member of the Standing Committee of CPC Guangxi Zhuang Autonomous Regional Committee and Minister of Publicity Department of the Autonomous Region, Mr. Poramase Ngampiches, Vice Cultural Minister of Thailand, Datuk Isham Ishak, Secretary of State of the Ministry of Tourism, Arts and Culture of Malaysia, Mr. Phol Norith, Under Secretary of State of the Ministry of Culture and Fine Arts of Cambodia, Mr. Orlando Bocaling Magno, Commissioner of the National Commission for Culture and the Arts of the Philippines, and other culture and tourism officials from ASEAN countries were present at the opening ceremony of the forum. ACC Secretary-General Chen Dehai attended the opening ceremony and delivered remarks. 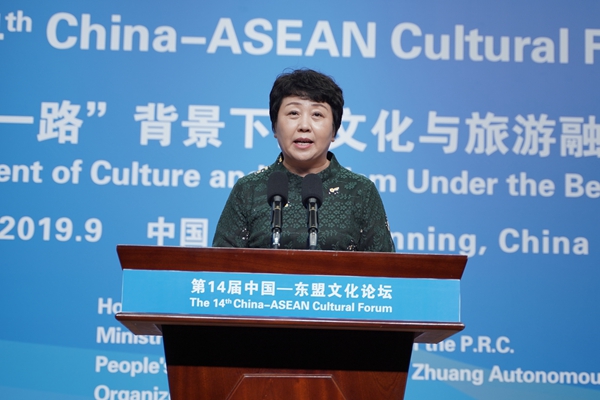 Mr. Zhang Xu highlighted in his speech that ASEAN is one of the regions where China has made the most significant achievements in jointly promoting the Belt and Road Initiative. In 2018, the two-way visits between ASEAN countries and China exceeded more than 57 million. Moving forward, China is committed to promoting culture and tourism integration and will work hand in hand with ASEAN countries to further deepen practical cooperation in the fields of culture and tourism. 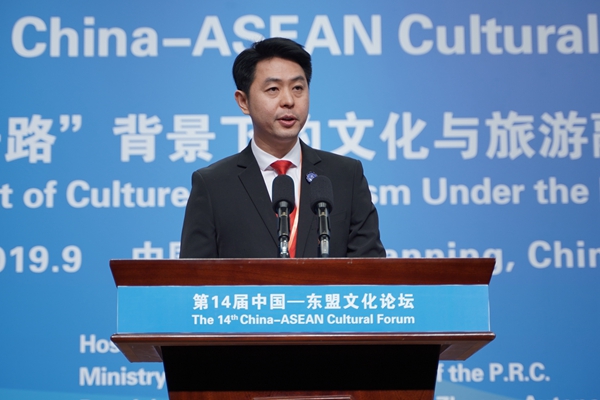 Poramase Ngampiches said that sustained and in-depth development of ASEAN-China relationship has been made since the Belt and Road Initiative was introduced 6 years ago. As ASEAN Chair this year, Thailand proposed the ASEAN Cultural Year 2019 to globally introduce the diverse and unique arts and cultures of ASEAN through tourism and creative industries and further promote the sustainable development of the region. 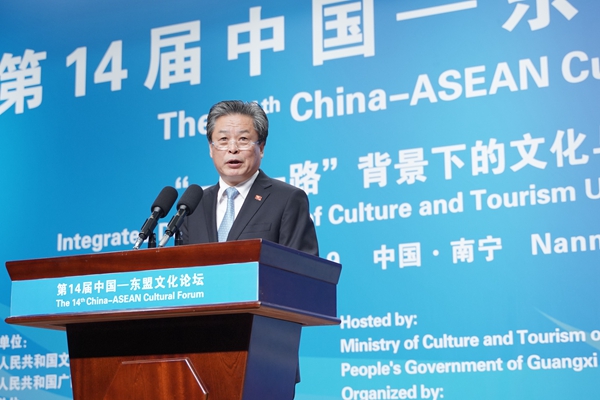 Datuk Isham Ishak said that Malaysia will continue to support and be a part of the Belt and Road Initiative by deepening exchanges and cooperation in the fields of culture and tourism between Malaysia and China. The Year 2020 has been announced as the Year of Culture and Tourism of the two countries, more Chinese tourists are expected to visit Malaysia.

Secretary-General Chen Dehai stated in his address that people-to-people and cultural ties have grown to be the third pillar of ASEAN-China relations, playing an important role in underpinning a sound and sustained growth of our strategic partnership. The ASEAN-China Cultural Forum has been providing an important platform for advancing cultural exchanges and cooperation, as well as enhancing mutual understanding and friendship. Both sides should deepen culture and tourism cooperation by strengthening policy exchanges and experience sharing so as to promote the integrated development of culture and tourism. 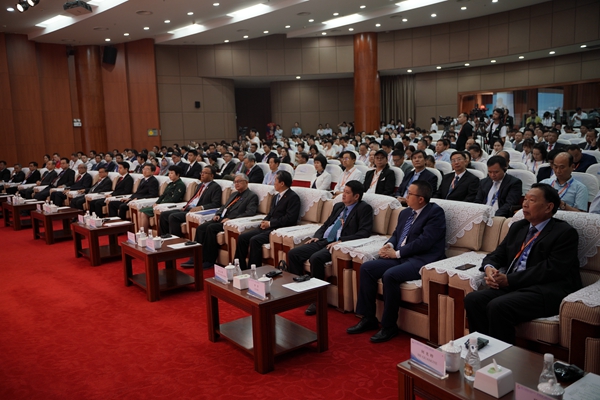 The forum was held from 19 to 21 September 2019 in Nanning and saw an attendance of over 200 representatives from relevant ministries of ASEAN Member States, academics and professionals from associations and enterprises of the culture and tourism sectors both in the ASEAN countries and China, as well as representatives of international organizations. Participants conducted extensive and in-depth exchanges on integrated development of culture and tourism, contributing to a lively and stimulating atmosphere. Several other activities were also held during the forum, such as the Guangxi Culture and Tourism Promotion Conference and Guangxi Week of China-ASEAN Culture and Tourism Exchanges 2019.