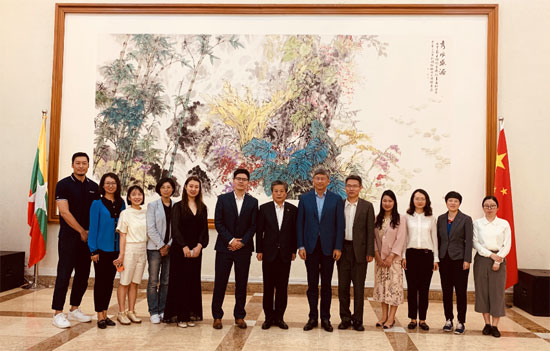 From 23 to 26 October 2019, Mr. Chen Dehai, Secretary-General of the ASEAN-ChinaCentre (ACC), led aChinese media delegation to visit Myanmar. Mr. U Hau Khan Sum, Director-General of ASEAN Affairs Department of Myanmar Ministryof Foreign Affairs, Mr. U Aye Ko Ko, Deputy Director-General of the Policy Department of Myanmar Ministryof Foreign Affairs, and Mr. U Thet Swe, Acting Managing Director of the News and Periodical Enterprise of Myanmar Ministry of Information, met with the delegation and gave interviews respectively. Chinese Ambassador to MyanmarMr. Chen Hai exchanged views with the delegation and gave an interview. The delegation also visited Myanmar Radio and Television （MRTV） and Mizzima Media Group for discussion, listened to the presentationby China Communication Construction Company (CCCC) onChina-Myanmar infrastructure cooperation projects, and visited Yangon University where they exchanged views with Chinese students.
Secretary-General Chen Dehai thanked the Myanmar side for its warm hospitality and thoughtful arrangements. He said that in recent years, ASEAN-China relations have developed rapidly and achieved fruitful results. In the context of ASEAN-China Year of Media Exchanges, this trip focuses on the development of ASEAN-China strategic partnership and Myanmar-China relations, explores exciting stories of Chinese business development in Myanmar, promotes exchanges and mutual learning between the media from two sides, and enhances mutual understanding between the two peoples. It is also a warm-up activity to celebrate the 70th anniversary of bilateral relations. Secretary-General Chen gave an overview of the functions and mandate of ACC. He said that ACC would continue to play a bridging role and work with all parties to make greater contributions to promoting ASEAN-China friendly cooperation and exchanges in various fields.
Director U Hau Khan Sum and other Myanmar officials said that Myanmar and China enjoy a long history of friendly exchanges. Guided by the Five Principles of Peaceful Coexistence advocated by both sides, Myanmar-China “paukphaw”friendship has been deepening and bilateral relations have been upgraded to comprehensive strategic partnership. The two sides have already signed severalcooperation agreementswithin the framework of BRI, including Myanmar-China Economic Corridor to helpimproveMyanmar infrastructure, raise people's living standards and create employment opportunities. The Myanmar government highly appreciates the BRI international cooperation mechanism and believes that it will play an important role in promoting regional connectivity. Myanmar and China should have closer cooperation in the media sector to enhance mutual understanding between the two peoples and strive for greater development of bilateral relations in the new era.
AmbassadorChen Haisaid that China and Myanmar are a natural community with a shared future, enjoying geographical proximity andcultural affinity. At present, China-Myanmar relations have entered a new stage of development, and the traditional “paukphaw”friendship between the twois full of vitality. Next year, China and Myanmar will celebrate the 70th anniversary of the establishment of diplomatic relations, and both sides will hold a series of celebrations. China is willing to take this opportunity to further strengthen friendly exchanges and practical cooperation with Myanmar to push forward the comprehensive strategic partnership.
Representatives from Myanmar Radio and Television (MRTV)and Mizzima Media Groupbriefed on their respective development and cooperation with China. They said that in recent years, media cooperation between the two sides has been deepening and the number of mutual visits has been increasing. They hopedto see such interactive activitiescarry on to enhance mutual understanding and mutual learning of latest development of each other's economy, society, culture and other fields.
Representatives ofCCCC groupgave briefing on the recent progressof infrastructure cooperation projects within the framework of the BRIincluding construction of harbours, roads and bridges. They expressed willingness to further deepen cooperation with Myanmar, and better serve the BRI cooperation and the building of CMEC so as to promote regional interconnectivity and economic development.