2019-11-04 10:13:00 source：ASEAN-China Centre
On 4 November 2019, the China (Chongqing)-Singapore Demonstration on Strategic Connectivity Financial Summit 2019 (hereinafter referred to as CCI-FS 2019) was held in Chongqing. With the theme of“Financial Connectivity Supporting the ‘Belt and Road’-Open and Innovative Finance Driving the New International Land-Sea Trade Corridor”, the CCI-FS 2019 was co-hosted bythe Ministry of Commerce of China, People’s Bank of China, China Banking and Insurance Regulatory Commission, China Securities Regulatory Commission, State Administration of Foreign Exchange of China, Chongqing Municipal People’s Government, the Ministry of Trade and Industry of Singapore and the Monetary Authority of Singapore.More than 1200 participantsattended the opening ceremony, including representatives of financial supervisory authorities of China and ASEAN countries, international organizations, executives of well-known financial institutions and enterprises in the Asia-Pacific region, famous experts and scholars at home and abroad. Mr. Guo Chuanwei, Director of Trade and Investment Division (TID) of ASEAN-China Centre(ACC) was participated in the opening ceremony and relevant activities upon invitation. 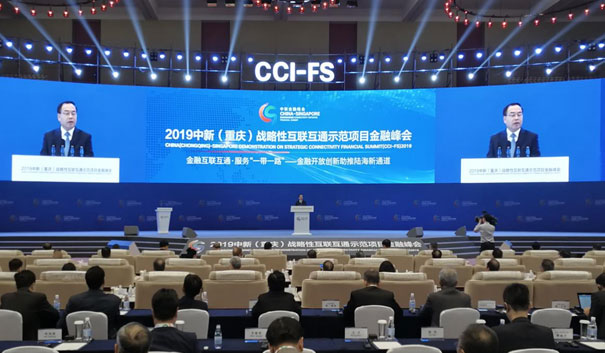 Mr. Tang Liangzhi, Deputy Secretary of the CPC Chongqing Municipal Committee and Mayor of the Chongqing Municipal People’s Government welcomedall the guests. He said that the China (Chongqing)-Singapore Demonstration Initiative on Strategic Connectivity (hereinafter referred to as CCI) is a major cooperation project carried forward by the governments of China and Singapore from strategicandlong-termperspectives, which has been well performed. Financial services are the key areas of cooperation for CCI. It is necessary to give full play to Chongqing’s role as the operation center of CCI, deepen cooperation between West China and ASEAN countries in the fields of financial policyinnovation, financial resources integration, financial supervision cooperation and financial service exchange, and jointly promote the Belt and Road Initiative to achieve mutual benefit and common development.

Mr. Ong Ye Kung, Minister of Education and Board Member of the Monetary Authority of Singaporedelivered remarks on behalf of theSingaporean side. He said that the trend of multilateralism and free trade is irreversible. ASEAN countries have become important partners of China in strengthening economic cooperation and free trade. They are vigorously carrying out cooperation such as CCI. ASEAN countries and China have many opportunities of cooperation in financinginfrastructureand green finance. Chongqing will play a key role in connectivity between ASEAN countries and West China. He hoped to take the opportunity of CCI-FS 2019 to motivate every party to deepen cooperation in financeintegration, financial services quality improvement and sustainable and healthy development of regional real economy.