The Guangxi government set up a China cultural center with the Ministry of Culture and Tourism in Hanoi in 2017. The center has organized research, communication and publicity events with local institutions. It has used overseas social media platforms to promote Chinese cultural and travel resources during the pandemic.

The moves have played a role in promoting cultural and tourism communication between Guangxi and countries involved in the Belt and Road Initiative, especially ASEAN members, Guangxi authorities said.

The Guangxi culture and tourism department has held activities, including the China tourism and culture week, performances, exhibitions, lectures and artistic training with overseas Chinese cultural centers in recent years.

It also helped cities in Guangxi to organize cultural communication events with ASEAN members. It encouraged regions including Nanning, capital of the autonomous region, to hold multinational Spring Festival galas and organized performance companies to put on shows in ASEAN countries.

Guangxi explored its cultural and tourism resources and created artworks with the theme of the ancient Maritime Silk Road. It produced related symphonies, musical dramas and historical dance dramas during the 13th Five-Year Plan (2016-20). They were performed in communication activities with countries involved in the BRI, including ASEAN members.

One of Guangxi's cities helped train cultural and traveling professionals from the four bordering provinces of Vietnam. Guilin Tourism University admitted students from the provinces and offered them scholarships throughout 2019-21, said Wang Zixi, director of the Guilin culture and tourism bureau.

Publicity and promotional work is another priority of Guangxi's culture and tourism authorities. They have organized local companies to hold promotional conferences in countries such as Laos, Malaysia, Thailand and Vietnam and have taken part in influentially international tourism exhibitions.

The authorities invited ASEAN travel agencies, artists and media representatives to visit Guangxi and learn about its tourism resources. 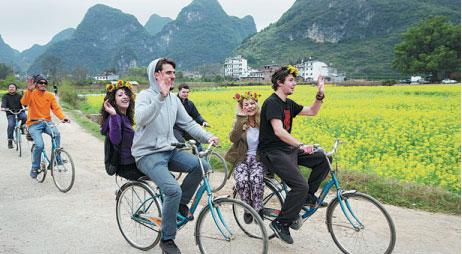