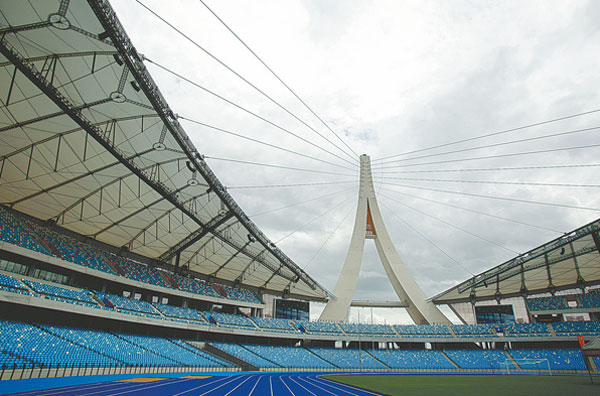 The Morodok Techo National Stadium in Phnom Penh will be the centerpiece venue of the 2023 Southeast Asian Games. Developed by the China State Construction Engineering Corp under China's grant aid, the stadium is a symbol of the friendship between China and Cambodia. [Photo/Xinhua]

The stadium will be the centerpiece venue for tournaments when Cambodia hosts the Southeast Asian Games for the first time in May 2023.

Developed by the China State Construction Engineering Corp under China's grant aid, the project started in August 2017 and was fully completed last month.

A handover ceremony of the stadium to Cambodia was held on Sunday in the presence of Cambodian Prime Minister Samdech Techo Hun Sen and visiting Chinese State Councilor and Foreign Minister Wang Yi.

Cambodian Tourism Minister Thong Khon, who is also the president of the National Olympic Committee of Cambodia, says the stadium is a great achievement in Cambodia's sports sector and a new symbol of the friendship between Cambodia and China.

The 39.9-meter-tall structure has been built in the shape of a sailing ship－both of its prows are 99 meters tall, and it is encircled by an ancient Angkor-style moat.

"The sailing ship symbolizes a long-standing traditional friendship between Cambodia and China because Chinese people used to travel by sailing ships to Cambodia in ancient times," Thong Khon says.

He says the 99-meter-tall prows of the sailing ship-like stadium depict the gesture of sampeah (placing the palms together in a prayer-like fashion as a greeting or a way of showing respect in Cambodia), which truly reflects Cambodian culture and tradition.

Covering a 16-hectare parcel in the 85-hectare Morodok Techo National Sports Complex, the five-story stadium has been constructed with advanced technology and high-quality materials, he says. 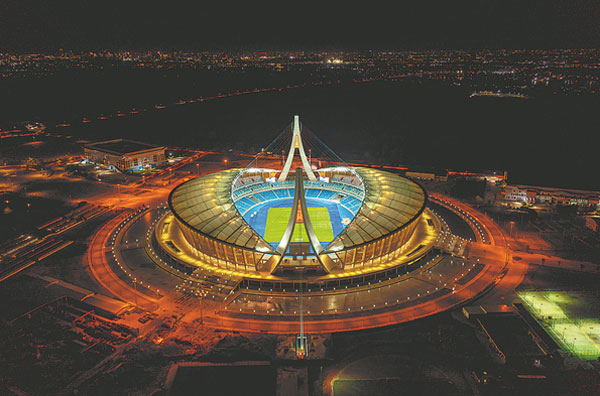 The Morodok Techo National Stadium in Phnom Penh will be the centerpiece venue of the 2023 Southeast Asian Games. Developed by the China State Construction Engineering Corp under China's grant aid, the stadium is a symbol of the friendship between China and Cambodia. [Photo/Xinhua]

"The China State Construction Engineering Corp was very responsible and it used high-end technology for the construction of the stadium in full compliance with all technical standards," he says.

"The stadium has a seating capacity of 60,000 with a design that will allow a full evacuation in seven minutes in case of emergency."

He adds that QR codes have also been installed on each seat.

Located about 18 kilometers in the northern part of the capital, the stadium also houses a hotel, sportswear and equipment shops, food courts and other facilities.

"It will not only support the development of the sports sector, but also serve as a magnet to attract tourists, especially Chinese guests, to Cambodia in the post-COVID-19 pandemic era."

The stadium is one of the cooperation projects between Cambodia and China under the Belt and Road Initiative, aiming at promoting sports, cultural exchanges and people-to-people contact.

Speaking at the event, Hun Sen says the stadium was the fruit of close cooperation between Cambodia and China, adding that he has never expected that the kingdom would have such a beautiful stadium.

"It's a record of the friendship between Cambodia and China," he says.

"Without support from China, we would definitely not have had this stadium."

"I can say that this is just the fruit harvested at the beginning of the season through our ironclad friendship," Hun Sen adds.

Wang says the stadium is the largest sports complex that China has provided to its foreign friends with grants.

"We built this nicely large stadium in Cambodia because our two peoples' friendship is very profound," he says.

"The stadium will serve as another bridge to connect the hearts of the peoples of our two countries," he says.

"It will also promote people-to-people bonds between Cambodia and the rest of the world, because it will bring together athletes and visitors from around the globe when there are major tournaments."

The stadium will be used to host major tournaments such as soccer, rugby and athletics, as well as large-scale exhibitions or cultural events.

Keo Sareth, secretary-general of the Football Federation of Cambodia, says the stadium not only injected a fresh impetus into Sino-Cambodian ties, but will also improve Cambodia's image in the international arena.

"We have wished to build a modern and large stadium like this for a long time. Now, with China's support, our dream comes true. It will promote Cambodia's honor and prestige on international arena," he says.

National sprinter Pen Sokong, 28, says: "It's a symbol of pride for Cambodia because in our history we have never had such a great stadium."

Sokong, who competed in the men's 100-meter dash in the 2020 Summer Olympics in Tokyo in July, says the stadium will be a new driving force for the country's athletes to train harder for the 2023 SEA Games. "I'm really looking forward to contesting at the new stadium then," he says.