On the afternoon of 4 November 2021, the Closing Ceremony of the 2021 Teachers Training for Local Chinese Teachers in Indonesia's Universities was successfully held. Mr. Chen Dehai, Secretary-General of the ASEAN-China Centre (ACC), Mr. Dino R. Kusnadi, Deputy Chief of Mission of the Indonesian Embassy in China, Dr. Ma Jianfei, Director-General of the Centre for Language Education and Cooperation (CLEC) of the Ministry of Education of China, Dr. Murpin Josua Sembiring, President of Ma Chung University of Indonesia, attended and addressed the closing ceremony online. 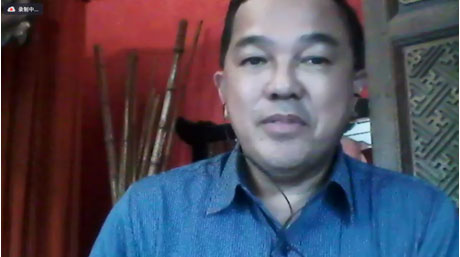 Dr. Murpin Josua Sembiring pointed out that language is an essential part of culture. Language learners should fully understand the real connotations of languages embedded in specific cultural backgrounds. Not only has this training enabled Indonesian local Chinese teachers to improve their teaching levels, and deepened their understanding of the rich and diversified Chinese culture, but also has inspired comparisons and in-depth thinking about the education systems of Indonesia and China, which will further boost the development of Chinese education in Indonesia. 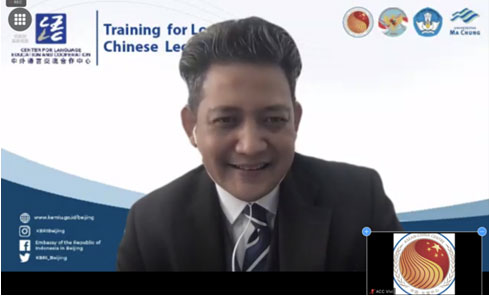 Mr. Dino R. Kusnadi highly appreciated the strong support of ACC and CLEC for the series of trainings, and expressed heartfelt gratitude to the experts, scholars and trainees for their active participation. It is believed that this training will deepen the trainees’ understanding towards Chinese culture and further enhance educational and cultural exchanges between the two countries, thus promoting the vigorous development of the local Chinese education in Indonesia. 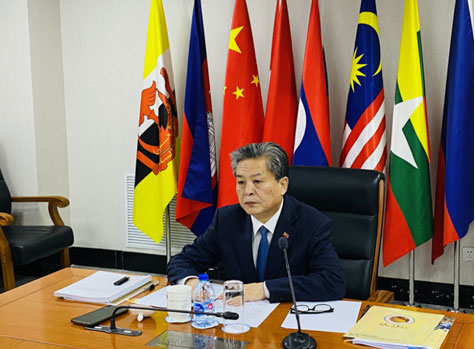 Mr. Chen Dehai extended sincere gratitude to the close partners of ACC, namely Mr. Djauhari Oratmangun, Ambassador of Indonesia to China, Dr. Ma Jianfei, Mr. Dino R. Kusnadi and Mr. Yaya Sutarya, Education and Cultural Attaché of the Indonesian Embassy in China, and expressed congratulations to the teachers who have finished the training. He also stated that Indonesia is a close partner of China in the Asia Pacific Region and beyond. The friendship between the two countries dates back to ancient times. With the integration of the Belt and Road Initiative and Indonesia’s Global Maritime Fulcrum Strategy, the relationship between Indonesia and China has continued to deepen in the past decades. At the 24th ASEAN-China Summit on 26 October 2021, the leaders of ASEAN Member States (AMS) and China reaffirmed that, with a view to ensuring economic recovery and people mobility, ACC and other available platforms should play a bigger role in promoting mutual trust and understanding between the people of ASEAN and China through exchanges on culture, education, technical and vocational training. As the only inter-governmental organisation co-founded by the 10 AMS and China, ACC will strive to implement the important consensus reached by the leaders of the two sides and make greater contributions to furtheringASEAN-China and Indonesia-China strategic partnerships.

Dr. Ma Jianfei stated that talents proficient in the languages and cultures of both sides are essential to the exchanges and cooperation between China and Indonesia in various fields. Local Chinese teachers play an irreplaceable role in enhancing bilateral relations between the two countries. CLEC will continue to provide strong support for the development of human resources in Indonesia by providing scholarships and training for local Chinese teachers, so as to normalise and institutionalise educational collaboration between the two countries, and make due contributions to an open and inclusive world with concrete actions. 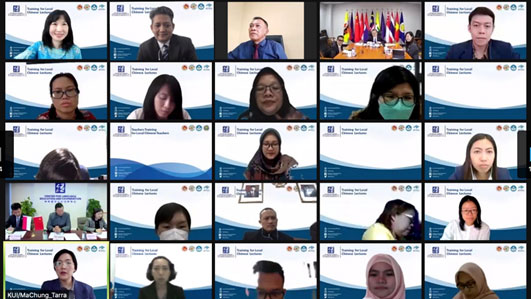 The training was jointly organised by the Embassy of Indonesia in China, ACC and CLEC. 103 local Chinese teachers from 40 Indonesian universities participated in this 7-day online training, which covered teaching methodology, design of classroom activities, language researches, HSK, application of online teaching resources, etc. Dr. Yi Ying Liem, Head of the Department of Chinese from Bina Nusantara University of Indonesia, shared her learning experience at the closing ceremony as the trainee representative.