On 15 November 2021, the 2021 China Xinjiang Development Forum, themed “Pursuing the Belt and Road Initiative and Promoting Xinjiang Development”, was successfully held in Beijing. Around 110 guests from more than 30 countries and international organisations, including China, Lao PDR, Indonesia and Malaysia, attended the forum. The forum was co-sponsored by the State Council Information Office of China and the People’s Government of Xinjiang Uygur Autonomous Region (XUAR). It has been six years since the last Xinjiang Development Forum held by China. Mr. Jiang Jianguo, Deputy Minister of the CPC Publicity Department stated in his speech that located at the center of the Eurasian continent, Xinjiang has historically been China's gateway to the west and played an important role in exchanges and mutual learning between eastern and western civilisations. Now, Xinjiang has become an important channel for exchanges among countries along the Belt and Road, and an important component for China's westward as well as all-round opening-up campaign. In recent years, Xinjiang has taken the Belt and Road Initiative as a golden opportunity for development, and made positive progress in building the core area of the Silk Road Economic Belt through scientific planning and proactive actions. 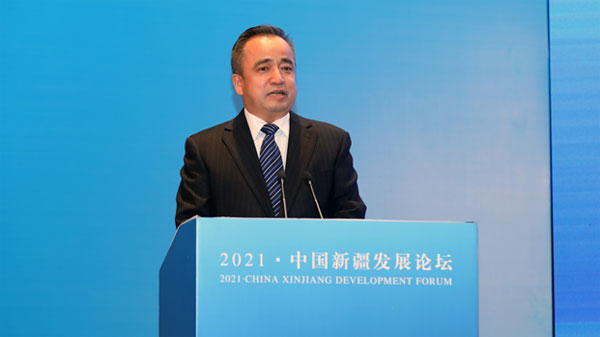 Mr. Aierken Tuniyaz, Deputy General Secretary of the CPC XUAR Committee and Acting Chairman of XUAR Government stated in his speech that driven by the development opportunities of the Belt and Road Initiative, Xinjiang has accelerated the construction of the core area of the Silk Road Economic Belt, opening the door of export-oriented economy even wider. Relevant cooperation has covered more than 50 countries and regions. Since the 18th CPC National Congress, under the strong leadership of the CPC Central Committee with General Secretary Xi Jinping at the core, XUAR has taken the people's aspiration for a better life as its goal and made unprecedented achievements in promoting economic and social development and improving people's livelihood. 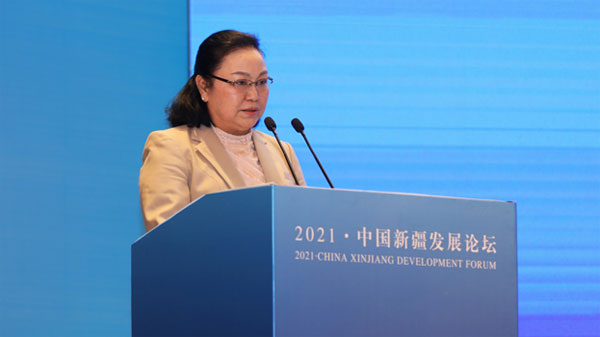 Ms. Khamphao Ernthavanh, Ambassador of the Lao PDR to China, acknowledged Xinjiang’s great achievements under the leadership of the CPC in her speech, saying that under the Belt and Road Initiative, Xinjiang has become an important window for the western part of China to open up to the outside world. This year marks the 60th anniversary of the establishment of diplomatic relations between Laos and China and is also the Laos-China Friendship Year. Xinjiang, with a harmonious society and rapid developing economy, has provided important guarantee for the implementation of the Belt and Road Initiative, and also brought benefits to Laos-China cooperation projects under the Initiative. Mr. Chen Dehai, Secretary-General of the ASEAN-China Centre (ACC) stated in his speech that ASEAN is an important region to the joint development of the Belt and Road and Xinjiang is located at the core of the Belt and Road, thus giving huge potential to ASEAN-Xinjiang economic and trade cooperation and cultural exchanges. ACC will continue to take an active role in promoting ASEAN-China cooperation under the Belt and Road Initiative and vigorously promoting exchanges and cooperation between ASEAN and China’s sub-national localities for common development and progress. ACC will also continue to closely follow and publicize Xinjiang’s development and make unremitting efforts to deepen cooperation between ASEAN countries and Xinjiang in various fields.