On the afternoon of 6 December 2021, the opening ceremony of the “2021 Upskilling Training for Indonesian Teachers in Tourism Industry” was successfully held. Mr. Chen Dehai, Secretary-General of the ASEAN-China Centre (ACC), Mr. Dino R. Kusnadi, Deputy Chief of Mission of the Embassy of Indonesia in China, Dr. Wikan Sakarinto, Director General of Vocational Education of the Ministry of Education, Culture, Research and Technology of Indonesia, Dr. Margana M. Hum, Vice Rector of Yogyakarta State University of Indonesia, and Dr. Liu Hong, President of Dalian University of Foreign Languages (DUFL) attended and addressed the opening ceremony online. 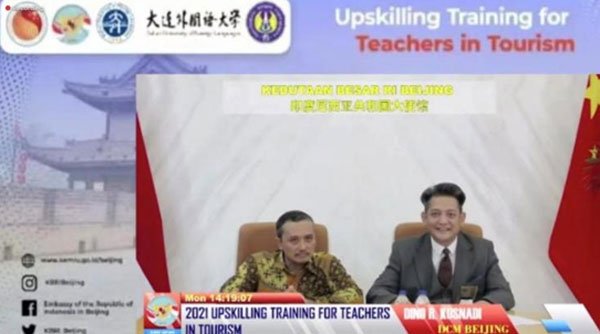 Mr. Dino R. Kusnadi stated that the year 2021 marks the 71st anniversary of the establishment of Indonesia-China diplomatic relations. The two countries have overcome the impact of the COVID-19 pandemic and further consolidated the comprehensive strategic partnership. With the integration of the Belt and Road Initiative and Indonesia’s Global Maritime Fulcrum Strategy, China’s investment has supported various strategic projects of the four Economic Corridors in Indonesia and accelerated the collaboration of bilateral trade, infrastructure construction and people-to-people exchanges in an all-round and steady way. This training is of great significance to the improvement of Indonesia’s human resources. It is hoped that trainees will exchange ideas, share experiences and build friendships with Chinese experts. 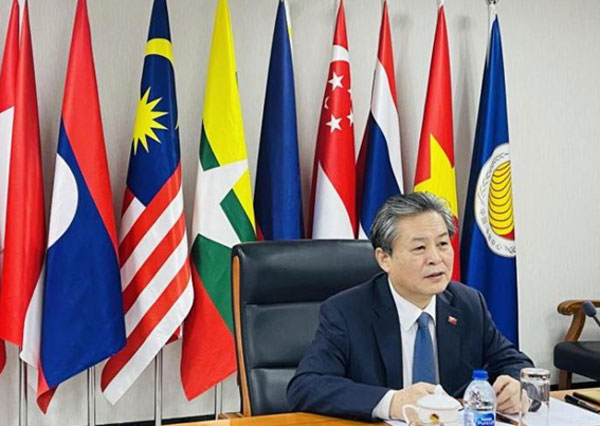 Mr. Chen Dehai stated that, at the Special Summit to Commemorate the 30th Anniversary of China-ASEAN Dialogue Relations on 22 November, leaders of ASEAN Member States (AMS) and China jointly announced the establishment of ASEAN-China Comprehensive Strategic Partnership. Moreover, they reaffirmed to enhance cooperation on education, including the early resumption of entry into China by international students from AMS in a healthy, safe and orderly way, as well as on culture, tourism, media, human resources and exchanges among the youth and think-tanks. ACC has played a significant role in promoting socio-cultural and people-to-people exchanges between the two sides over the past decade since its establishment. ACC is ready to work together with Indonesian partners to jointly make new progress in Indonesia-China collaboration. 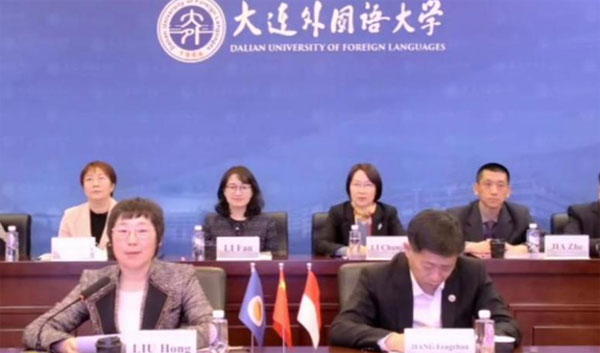 Dr. Liu Hong extended sincere gratitude to ACC and the Embassy of Indonesia in China for the trust and support. She pointed out that the year 2021 marks the 30th anniversary of the ASEAN-China Dialogue Relations with bilateral collaboration continuously deepening and expanding. International talent cultivation has become a mission for foreign language universities and colleges. DUFL as the host will seize the opportunity to give full play to its disciplinary advantages to boost the ASEAN-China regional integration. 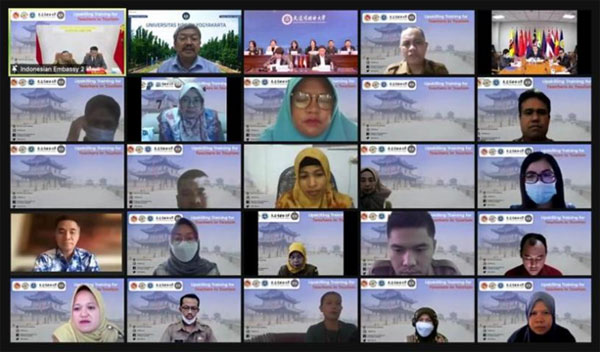 This five-day training is co-organised by ACC and the Embassy of Indonesia in China and undertaken by DUFL. 200 Indonesian teachers in tourism industry are to participate in courses covering national and provincial overview of China, frontier theories of tourism management, case studies of integration of industry and education, Chinese language and culture appreciation, a virtual tour of Dalian, discussions and seminars on tourism.