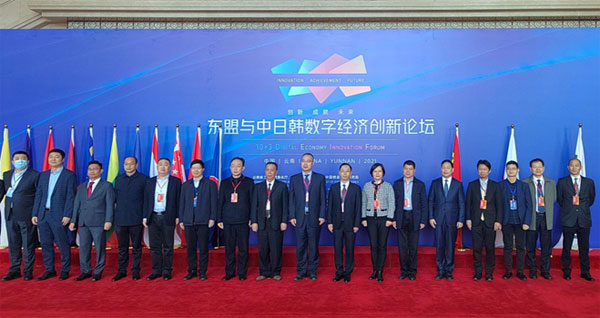 On 8 December 2021, jointly hosted by the Department of Industry and Information Technology of Yunnan Province, Yunnan Communications Administration (YCA) and China Academy of Information and Communications Technology (CAICT), the ASEAN plus China, Japan and ROK (10+3) Digital Economy Innovation Forum was held in Kunming city. Around 400 representatives from the Ministry of Industry and Information Technology of China (MIIT), Yunnan Provincial Government, Consulates-General of ASEAN Member States (AMS) in Kunming, relevant research institutions as well as enterprises attended the forum offline. Mr. Guo Chuanwei, Director of the Trade and Investment Division of the ASEAN-China Centre (ACC) was invited to the forum and delivered remarks at the opening ceremony. Mr. Yu Zhicheng, Deputy Director-General of the International Department of MIIT, Mr. E Weinan, Academician of the Chinese Academy of Sciences and Head of Beijing Institute of Big Data, Mr. Kou Jie, Director-General of the Department of Industry and Information Technology of Yunnan Province, Mr. Wang Zhiqin, Vice President of CAICT, Mr. Sok Puthyvuth, Secretary of State of the Ministry of Post and Telecommunications of Cambodia, officials of the Ministry of Digital Economy and Society of Thailand and the Ministry of Communications and Multimedia of Malaysia, as well as representatives from the Embassy of Japan in China and telecommunication industry of Japan and ROK attended the forum online and offline. 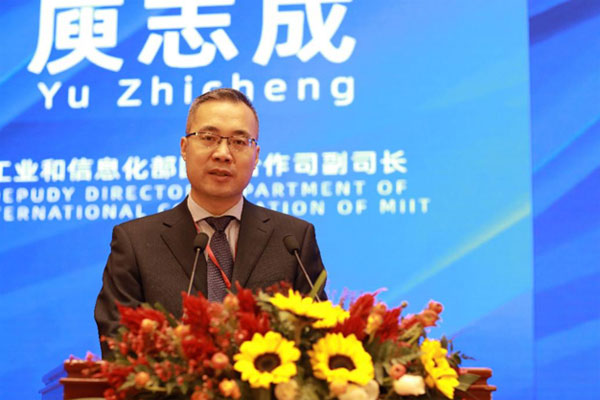 At the opening ceremony, Mr. Yu Zhicheng stated that the 10+3 economic development is stepping into a new stage of digital economy and smart manufacturing, while innovative development has become an important driving force continuously promoting regional economy growth. Countries in the region should strengthen cooperation and exchanges in fields of new generation of digital technology including 5G, AI, big data and internet, pursue dialogues and coordination on policies, technologies, standards and industries, and deepen innovative application of digital technology, in an effort to jointly promote the development of regional digital economy in a healthy, orderly and rapid way. Officials of digital economic authorities of AMS and representatives from communication associations of Japan and ROK briefed on the development plans and status of digital economy in their own countries, and said that 10+3 has a broad space of innovative cooperation. They called for further regional cooperation and higher level of integrative development of regional digital industry for the welfare of the people in the region. Mr. Guo Chuanwei mentioned in his remarks that this year marks the 30th Anniversary of ASEAN-China Dialogue Relations, and leaders of the two sides jointly announced the establishment of an ASEAN-China Comprehensive Strategic Partnership that is meaningful, substantive and mutually beneficial. Led by ASEAN, the Regional Comprehensive Economic Partnership (RCEP) will take effect at the beginning of next year. All these will inspire domestic driving forces of regional countries, promote long-term prosperity and sustainable development of the region, and open up broader space for ASEAN-China cooperation.

During the forum, the Awarding Ceremony of 10+3 Digital Economy Innovation Awards was held. 26 outstanding projects were shortlisted for the finals from nearly 200 digital domain entries submitted by 10+3 in the sectors of industry, agriculture, health care, education, electricity, energy and information communication. Mr. Guo Chuanwei was invited to announce the third prize of Digital Economy Innovation Competition and award the prizes to the winners. The Launch Ceremony of “Set Sail” Yunnan Action Plan for 5G Application and signing of relevant projects were also held at the site.