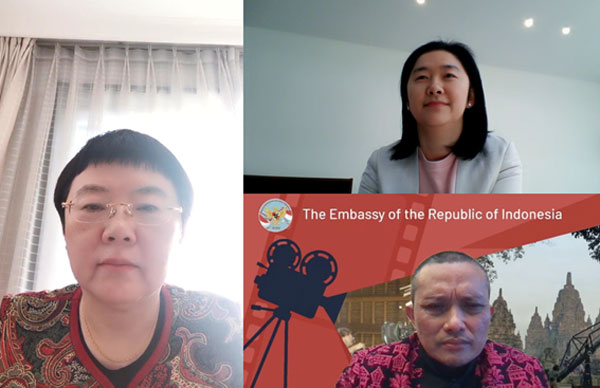 Ms. Li Yaying stated that ASEAN is a close neighbour, good friend and great partner of China, as well as a high priority in China’s neighbourhood diplomacy and a key region for high-quality cooperation under the Belt and Road Initiative. At the recent Special Summit to Commemorate the 30th Anniversary of China-ASEAN Dialogue Relations, leaders of ASEAN Member States (AMS) and China jointly announced the establishment of ASEAN-China Comprehensive Strategic Partnership, marking a new milestone in the history of ASEAN-China relations. The youth are the leaders and creators of the future. It is hoped that young friends can carry forward the friendship between AMS and China and further contribute to ASEAN-China Comprehensive Strategic Partnership.

Ms. Natthira Krasaesarn pointed out that the youth are ambassadors of people-to-people exchanges between AMS and China. The governments of Thailand and China attach great significance to improving their educational standards, enhancing people-to-people exchanges and empowering youth growth and development. It is hoped that the forum will further promote friendly exchanges and mutual learning among the youth, deepen mutual understanding and promote common prosperity of AMS and China.

Mr. Yaya Sutarya indicated that the year 2021 marks the 71st anniversary of the Establishment of Indonesia-China Diplomatic Relations. The collaboration between the two countries in the field of people-to-people exchanges has been continuously promoted in an all-round and steady way. It is hoped that the youth can make full use of this forum to share knowledge and experience, seize opportunities and tackle challenges in the new era. This forum is a key component of the ASEAN-Jiangsu Exchange Week commemorating the 30th anniversary of the ASEAN-China Dialogue Relations. Dr. Qiao Xu and Mr. Feng Dasheng inaugurated the NanjingTech Base for ASEAN-China Chemical Engineering Education and Cooperation after the opening ceremony.