The forum was hosted by the Trilateral Cooperation Secretariat (TCS) under the theme of “Future-Oriented Trilateral Cooperation: Lasting Peace, Common Prosperity, Shared Culture” in Seoul, Republic of Korea (ROK) both online and offline. Mr. Wang Yi, State Councilor and Foreign Minister of the People’s Republic of China, Mr. Hayashi Yoshimasa, Minister for Foreign Affairs of Japan, and Mr. Park Jin, Minister of Foreign Affairs of the ROK, sent congratulatory messages to the forum. Ms. Ou Boqian, Secretary-General of the Trilateral Cooperation Secretariat, gave remarks in the opening session and expressed her sincere appreciation for the care and continued support to IFTC and TCS from governments and the public of the three member states. She emphasised that under the current international circumstances, it has much more significance to strengthen international exchange and cooperation. She hoped that the forum will become an integrated platform for situation analysis, policy interpretation and academic recommendation on trilateral cooperation, bringing new impetus to regional cooperation, and contributing to regional and international peace and prosperity.

Mr. Xing Haiming, Ambassador of China to the ROK, Mr. Aiboshi Koichi, Ambassador of Japan to the ROK, Mr. Cho Hyun-dong, First Vice Minister of Foreign Affairs of the ROK, Mr. Zhang Ping, Former Vice Chairman of the Standing Committee of the National People’s Congress of China, Mr. Hirose Katsusada, Governor of Oita Prefecture of Japan, and Mr. Kim Hwang Sik, Former Prime Minister of the ROK, addressed the opening session online or offline. They congratulated on the opening of the forum, spoke highly of the progress of the trilateral cooperation and the important role played by TCS, and pointed out that it is vital to continue to enhance political mutual trust, expand economic and trade cooperation, and strengthen people-to-people exchanges. China, Japan and the ROK should jointly cope with global challenges such as the COVID-19 pandemic and strive to promote the common development of Northeast Asia in the post-epidemic era. 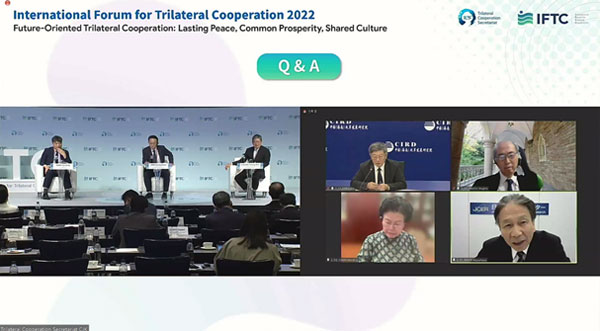 The forum had three sessions. A total of 21 guests including government officials, think tank heads and college scholars in the areas of diplomacy, economy and culture from China, Japan and the ROK carried out discussions and exchanges under the themes of “Engage to Embrace: Institutionalization of Cooperation as a Key to Human Security and Peace”, “A New Chapter: Driving Inclusive Growth for Regional Common Prosperity”, and “From the Past to the Future: Embracing Shared Culture towards the Sense of Community”. 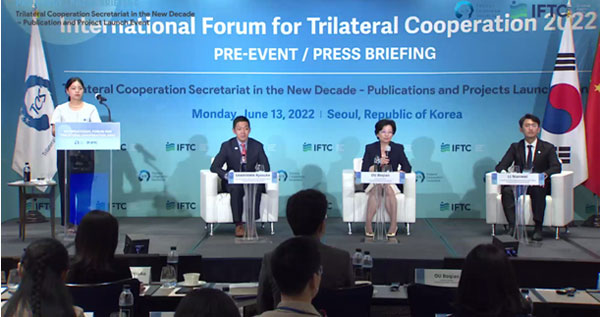