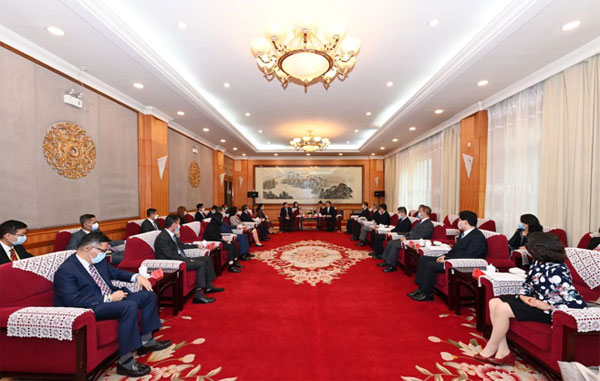 On 12 July 2022, Mr. Xin Changxing, Secretary of the CPC Qinghai Provincial Committee, met in Xining with the delegation of representatives of ASEAN Member States (AMS) embassies and ASEAN media in China. The delegation was headed by Mr. Arthayudh Srisamoot, Ambassador of Thailand to China, and its members included Mrs. Khamphao Ernthavanh, Ambassador of Lao PDR to China, Mr. Chen Dehai, Secretary-General of the ASEAN-China Centre (ACC), diplomats from the 10 AMS embassies in China, and Beijing correspondents of Indonesian and Vietnamese Media. Mr. Gao Anming, Vice President and Editor-in-Chief of the China International Communications Group (CICG), Mr. Wang Da’nan, Member of the Standing Committee and Head of the Publicity Department of the CPC Qinghai Provincial Committee, Mr. Zhu Xiangfeng, Member of the Standing Committee and Secretary-General of the CPC Qinghai Provincial Committee, Mr. Liu Chao, Vice Governor of Qinghai Province and Mr. Arianto Surojo, Director of the Information and Public Relations Division of ACC, attended the meeting.

Secretary Xin Changxing welcomed the delegation to visit Qinghai and briefly introduced the conditions of the province. He noted that President Xi Jinping delivered an important speech at the Special Summit to Commemorate the 30th Anniversary of ASEAN-China Dialogue Relations last November. Leaders of both sides announced the establishment of an ASEAN-China Comprehensive Strategic Partnership, which is a new milestone in the history of relations between two sides, injecting new impetus into regional and world peace, stability, development and prosperity. This year marks the beginning of the ASEAN-China Comprehensive Strategic Partnership, and also the Year of ASEAN-China Sustainable Development Cooperation. As economic and cultural ties between Qinghai and ASEAN continue to grow, ASEAN has become an important trading partner of Qinghai. We will thoroughly implement the important principles put forward by President Xi Jinping and build on the advantages and unique features of Qinghai, so as to further strengthen exchanges and cooperation with ASEAN in economic, trade, ecological, cultural, media and other fields, thus making contribution to the growth of ASEAN-China Comprehensive Strategic Partnership.

Ambassador Arthayudh Srisamoot expressed appreciation to the Party leadership and government of Qinghai for the hospitality and arrangements in welcoming the delegation. He noted that Qinghai is the source of the three major rivers in Asia, namely the Yangtze, Yellow and Lancang-Mekong River, thus it plays very important role in preserving the environment of our future generations. The delegation’s visit to Qinghai is fitting as it is in line with the theme of ASEAN-China sustainable development cooperation. China will be the leader in achieving low-carbon development, while clean energy is the future of Qinghai. We know that sustainability holds the key to development, thus we thank China, especially Qinghai for taking the lead in promoting green and sustainable energy. It is believed that AMS and Qinghai will have more cooperation potential in sustainable development, trade, investment as well as people-to-people and cultural exchanges.

It is the fifth consecutive year that ACC has organized familiarization trip for AMS diplomats and ASEAN correspondents in China to visit provinces and cities outside Beijing. During their stay in Qinghai, the delegation visited Xining, Hainan Prefecture and Huangnan Prefecture. The trip is co-sponsored by ACC and CICG and organised by China Center for International Communication Development of CICG.