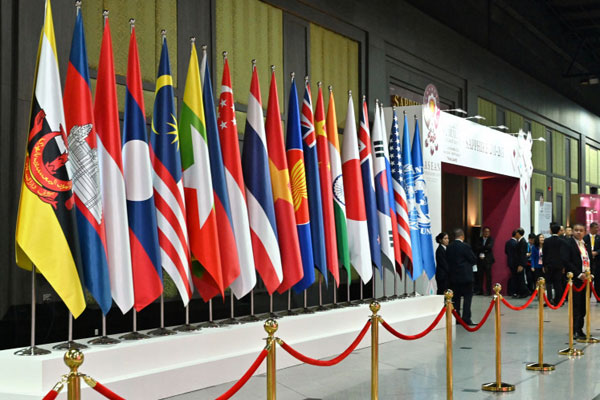 The national flags of the various countries attending the 35th ASEAN Summit are displayed in Bangkok on Nov. 4, 2019.(AFP/ASEAN Secretariat)

As we celebrate the anniversary of the founding of ASEAN today, it is worth reflecting on the extraordinary journey the association has embarked on over the past 55 years.

The transformation of Southeast Asia has been nothing short of remarkable. The founding of ASEAN in 1967 ushered in tremendous growth and prosperity brought through the collective pursuit of trade liberalization and economic development.

With a combined GDP of more than US$3.4 trillion in 2021, the region has now emerged as the world’s fifth-largest economy, and is on-track to become the fourth largest by 2030.

There is no doubt that ASEAN still has a long way to go, but more importantly, member states remain resolute in moving toward a true ASEAN Economic Community (AEC). The achievements made through this gradual and incremental process are indeed worth celebrating.

Signed in 2009 against the backdrop of the worst global economic crisis since the Great Depression, the ATIGA has resulted in zero-tariff treatment for more than 98 percent of intra-ASEAN tariff lines. The agreement instituted a number of initiatives, such as the ASEAN Single Window and the ASEAN Trade Repository, that help ASEAN businesses to navigate trade rules.

The ATIGA is currently being upgraded to make the agreement more relevant to the current needs of the business community.

Likewise, the ATISA, which was signed in 2020 and replaces the ASEAN Framework Agreement on Services, further advances the region’s trade in services. Amongst others, the Agreement sets a clear mandate and timeline for ASEAN to transition to the negative listing schedules that provide a higher degree of transparency and deeper level of services-trade integration.

Both the initiatives have contributed significantly to ASEAN trade growth. Over the past decade, intra-ASEAN trade increased from $500 billion in 2010 to $712 billion in 2021, making up about 21 percent of the region’s total trade. With more than $3 trillion of total trade, ASEAN has become the fourth-largest trader in the world, behind only the European Union, China and the United States. Similarly, ASEAN’s trade in services also grew by 70 percent from $441 billion in 2010 to $637 billion in 2020.

Meanwhile, an improved business climate has boosted ASEAN’s attractiveness for global investors. The ASEAN Comprehensive Investment Agreement signed in 2009 and the recently launched ASEAN Investment Facilitation Framework have established a free-and-open investment regime in the region. Total foreign direct investment (FDI) inflows into ASEAN grew from $108 billion in 2010 to $175 billion in 2021, making ASEAN the world’s third-largest FDI recipient after the US and China.

Great strides have also been made in other key areas of cooperation. Infrastructure development for physical and digital connectivity; promotion of sustainable agriculture to enhance food security; fostering innovation in the area of science and technology; and integrating micro, small and medium enterprises (MSMEs) into the global market are among key ASEAN’s achievements in this regard.

ASEAN also takes a proactive role in the global economy. Along with China, Japan, the Republic of Korea, Australia and New Zealand, ASEAN embarked on Regional Comprehensive Economic Partnership (RCEP), currently the largest Free Trade Agreement in the world, which entered into force in January. Under RCEP, companies enjoy lower tariff rates for their exports; better access to cheaper and better-quality inputs for their production; and a more transparent business environment to grow in, not only for trade in goods, but also trade in services, investment and movement of people.

Dealing with emerging trends and challenges

The maintenance of political security and stability is the foundation for the promotion of economic prosperity and social progress in the region. In this regard, we should be mindful that ASEAN’s journey as a community continues to take shape amid an increasingly complex and uncertain strategic landscape, including non-traditional security challenges.

There are also emerging trends in the region that will shape the future of ASEAN community building and integration efforts -- among the most salient are digital transformation and a pressing demand for sustainability considerations: both are high on the ASEAN economic-integration agenda. A whole-of-community approach is essential given the cross-pillar nature of these important issues.

As far as digitalization is concerned, ASEAN is accelerating the pace of digital transformation in the region. With the average proportion of cash transactions declining from 48 percent in 2020 to 37 percent in 2021, and given the over 440 million active-internet users throughout the region, digital transformation, which has been accelerated by the COVID-19 pandemic, has been in the mind of ASEAN’s policymakers and stakeholders alike. If well-managed, ASEAN’s digital economy is projected to hit $1 trillion by 2030.

Within the AEC, numerous initiatives have also been put in place to propel the region’s digital economy. The recently adopted Consolidated Strategy on the Fourth Industrial Revolution (4IR) for ASEAN and the Bandar Seri Begawan Roadmap (BSBR) on Digital Transformation, for example, solidify ASEAN’s commitment toward inclusive digital transformation. Whereas the 4IR Strategy provides a clear narrative on how the ASEAN community intends to progress toward inclusive and sustainable digital transformation, the BSBR underscores, among others, ASEAN’s commitment to commence negotiations for an ASEAN Digital Economy Framework Agreement by 2025.

With increasing digitalization comes also the challenge of making the cyberspace safe and secure, including for businesses and individuals alike. ASEAN recognizes the importance of this and has launched a cybersecurity-cooperation strategy 2021-2025 in securing cyberspace for the region’s digital economy to develop.

Decades of strong regional-economic growth, however, has also resulted in the increase of carbon emissions in the region. Current estimates suggest that if no steps are taken to reduce global emissions, ASEAN’s GDP is expected to experience a decline of 11 percent by 2100. Ensuring the right balance between economic growth and sustainability is, therefore, key for ASEAN.

Committing to pursue net-zero carbon emissions as soon as possible in the latter half of the 21st century, for example, the AEC has put in place numerous initiatives across various fronts and sectors -- from energy, transport, agriculture, tourism, to finance -- to further advance the region’s climate and sustainability goals. ASEAN Green Bond Standards, ASEAN Taxonomy for Sustainable Finance, the Framework for Circular Economy for the AEC and the ongoing development of the ASEAN Carbon Neutrality Strategy are examples of such endeavors.

ASEAN’s economic journey over the past 55 years has been long and arduous. Notwithstanding numerous challenges, ASEAN has remained steadfast in pursuing its integration agenda and priorities, redoubling efforts to ensure that all commitments made in the AEC Blueprint 2025 are met.

In the same vein, ASEAN must further invest in building the resiliency of its education, health and social-protection systems. These efforts must go hand-in-hand with the pursuit of economic growth and development. We have seen how the multidimensional challenge of the COVID-19 pandemic has upended the lives and livelihoods of many people in Southeast Asia, further exacerbating preexisting inequalities. Our efforts to advance human-capital development are therefore crucial to the region’s post-pandemic recovery and a key part of our integration efforts.

Lastly, with the commencement this year of the conversation for an ASEAN community’s post-2025 vision that will chart the future direction of ASEAN, we need to ensure that ASEAN economic-integration efforts are not only sustained but solidified and get translated into additional tangible projects that benefit the ASEAN peoples and put ASEAN’s position in the global economy on a higher plane.