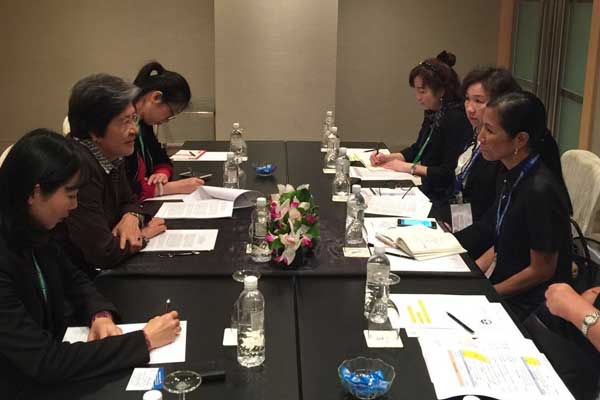 Minister Kohkarn spoke highly of the positive role of ACC in supporting practical cooperation between Thailand and China as well as ASEAN and China. She cited that Thailand is a good friend of China that go through thick and thin together. The two countries has similar culture, and their people share friendship from generation to generation. China was the largest source of tourists for Thailand in 2016, when Thailand welcomed 8.8 million Chinese tourists, an increase of 27% from 2015. The Thai government attaches great importance to the Chinese tourist market and stands committed to providing high-quality service to Chinese tourists. It will continue to build the capacity of tourism practitioners, and develop new products such as gourmet tourism and sports tourism. In 2018, Thailand will host the 37th ASEAN Tourism Forum. She looks forward to continued support by ACC, and work together with ACC to bring bilateral tourism cooperation to a new height.

Secretary-General Yang thanked the Thai Tourism and Sports Ministry for its support to the work of ACC. She expressed her admiration to the efforts of the Ministry to promote Thailand-China and ASEAN-China tourism cooperation which has benefited the people of both countries. She briefed on the work of ACC in 2016, and said that 2017 coincides with the 50th anniversary of the establishment of ASEAN and ASEAN-China Tourism Cooperation Year. ASEAN has launched Visit ASEAN@50 to celebrate the anniversary. ACC is willing to continue to strengthen cooperation with ASEAN countries, including Thailand, and jointly promote and make new contributions to ASEAN-China tourism cooperation. ACC will host the ASEAN-China Tourism Festival, shoot tourism documentaries, hold eco-tourism forum, and organize capacity building seminars to further tap the potential for tourism cooperation. ACC will actively promote the tourism resources, strengthen market docking, and promote sustainable economic and social development in the region.