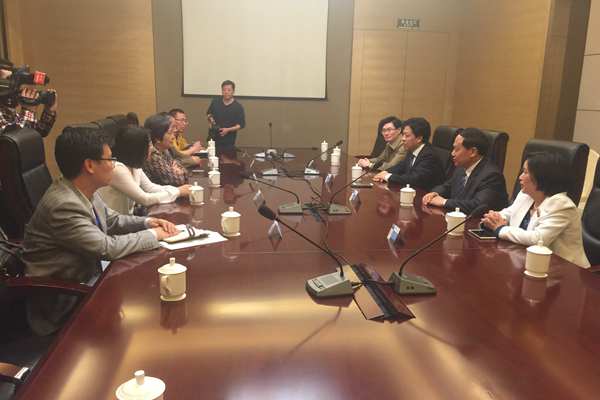 Vice Mayor Zhao warmly welcomed the delegation and introduced that Jiujiang is a city with a time-honoured history, rich cultural heritages, geographical advantages, sound ecological environment, abundant resources, and a promising future. In recent years, cooperation between Jiujiang and ASEAN countries has been intensified and expanded. Singaporean Royal Golden Eagle Group, Thai Charoen Pokphand Group, and other enterprises of ASEAN countries hold positive views of Jiujiang, invested in Jiujiang and contributed to Jiujiang’s development. The enterprises of Jiujiang also invested and established factories in eight of ASEAN countries. The investment contract is worth nearly USD 80 million. ASEAN products are very popular in Jiujiang, namely fruit, mineral, gas, wood. Jiujiang University established a Confucius Institute in Cambodia. The number of Jiujiang citizens visiting ASEAN countries also increased dramatically. As the only city with waterway port in Jiangxi province, Jiujiang has the basis and conditions to have closer, broader and more effective cooperation with ASEAN countries. He hoped ASEAN journalists could learn more about Jiujiang, follow up Jiujiang’s development, and better publicize Jiujiang so as to promote exchanges and cooperation between Jiujiang and ASEAN countries.

Deputy Editor-in-Chief Zhao opined that the delegation immersed themselves in Jiujiang’s socio-economic development and good ecological environment through the short trip. She also expected the ASEAN journalists could fully learn about Jiujiang’s socio-economic development and achievements in cooperation with ASEAN countries to spread positive messages of bilateral cooperation and facilitate exchanges and cooperation between both sides.

On behalf of the delegation, the journalist from Lao PDR thanked Jiangxi province and Jiujiang city for the hospitality, and thanked the State Council Information Office, ACC, China Foreign Language Publishing Administration, and China Report Magazine for the thoughtful arrangements. He hoped that there would be more opportunities to deeply understand China. He also expected that the mutual visits of media could enhance mutual understanding of both peoples and deepen bilateral cooperation.

Prior to the meeting with the journalists, Vice Mayor Zhao had a brief meeting with Secretary Yang and Deputy Editor-in-Chief Zhao, and exchanged views on the reporting trip, and advancing exchanges and cooperation between Jiujiang and ASEAN countries.