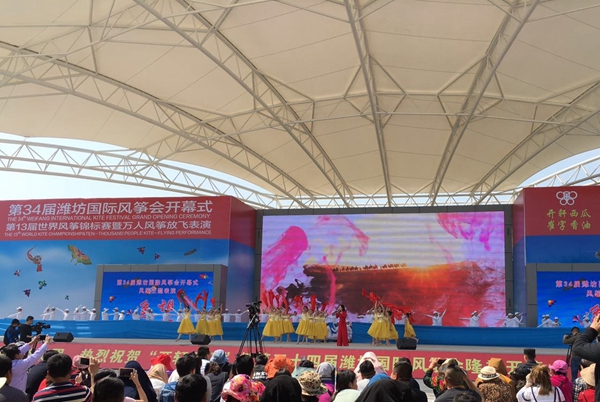 In the morning of 15 April, the opening ceremony of 34th WIKF and the 13th World Kite Championship & Ten Thousand-People Kite-Flying Performance was held at Sea of Joy in Weifang Binhai Economic and Technological Development Zone. Mr. Li Qun, Member of the Standing Committee of CPC Shandong Provincial Committee and the Executive Vice Governor, delivered an opening speech. Mr. Liu Shuguang, Secretary of the CPC Weifang Municipal Committee and Director of the Standing Committee of Weifang Municipal People’s Congress hosted the ceremony. Mr. Feng Jianzhong, Vice President of the Chinese Olympic Committee and President of the International Kite Federation, announced the opening of the festival. Vice Governor Li Qun said in his speech that Shandong is the hometown of China’s famous philosophers, namely, Confucius and Mencius, renowned for valuable rituals and ceremonies since ancient times, and now one of the places in China with much potential and vitality for development to attract investors from both China and abroad. The annual international kite festival has attracted many kite lovers to Weifang to exchange skills and enhance friendship. It had been playing important roles in promoting kite culture, encouraging public fitness, expanding China’s opening-up and promoting economic cooperation. He hoped that through WIKF, friends from all over the world could fully enjoy the happiness brought by flying kites, find true friendship, pursue development together and realize most expected dreams in Shandong. Secretary Liu Shuguang warmly welcomed distinguished guests from China and abroad on behalf of Weifang CPC Committee and the Municipal Government. He cited that after the 34 years of innovation and development, WIKF had grown into a platform to promote international exchanges and cooperation, showcase city civilization and explore future cooperation and development. Weifang would make this year’s festival a new starting point, upholding the concept of Being a Good Host of Grand Kite Festival and Promoting Cooperation and Development, and a gala of friendship and development. About 122 kite teams from 40 countries and regions were reported to attend the event this year.

In the evening of 14 April, leaders of Shandong province and Weifang city met with distinguished guests from China and abroad. Mr. Sun Jianhua, Deputy Director of Education, Culture and Tourism of ACC, attended the meeting. After the opening ceremony of the festival, ACC representatives joined other guests in some exchange activities including the visit to East Asia Livestock Exchange and the Sino-US Food and Agriculture Innovation Center in China Food Valley, Yangjiabu Kite Museum and the venue of China (Shouguang) International Vegetable Sci-Tech Fair. ACC representatives also had fruitful exchanges with other participants at the event.