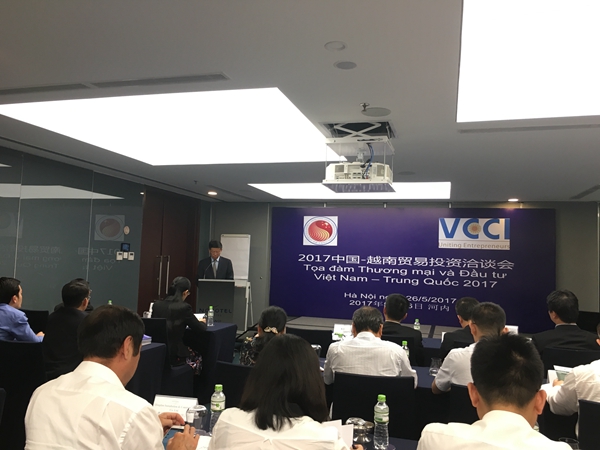 On 25-27 May 2017, ACC organized an investment mission to Ho Chi Minh City and Hanoi of Viet Nam. The mission was led by Mr. Li Yuan, Director of ACC Trade and Investment Department, and was joined by more than 20 people including Mr. Bui Huy Hoang, Commercial Counsellor of Viet Nam in China, and representatives of enterprises from Beijing, Shandong, Jiangsu and Guangdong provinces. During their stay in Viet Nam, ACC organized the China-Viet Nam Trade and Investment Cooperation Meeting, visited the industrial parks, paid visits to the Ministry of Industry and Trade of Viet Nam, Chinese Consulate General to Ho Chi Minh City and the Economic and Commercial Counsellor’s Office of Chinese Embassy in Viet Nam.

The China-Viet Nam Trade and Investment Cooperation Meeting was co-hosted by ACC and Viet Nam Chamber of Commerce and Industry. Mr. Li Yuan said at the meeting that Viet Nam is an important member of ASEAN and an important country along the Belt and Road. China and Viet Nam are synergizing their plans under the Belt and Road Initiative and the “Two Corridors and One Economic Circle” development plan which has achieved good progress. In 2016, bilateral trade volume between Viet Nam and China reached USD 98.2 billion. China remained the largest trading partner of Viet Nam for 13 years in a row and Viet Nam became China’s largest trading partner among ASEAN countries for the first time. Currently, China and Viet Nam are both at a stage of rapid growth, thus foresee a bright future for practical cooperation. It is hoped that businessmen of both sides would seize the opportunities to contribute to upgrading the level of China-Viet Nam and China-ASEAN economic and trade cooperation. Mr. Pham Quang Thinh, Deputy Director General of the Department of International Relations of the Viet Nam Chamber of Commerce and Industry, Mr. Do Kim Lang, Deputy Director General of the Trade Promotion Agency under the Ministry of Industry and Trade of Viet Nam and Mr. Bui Huy Hoang, Commercial Counsellor of the Vietnamese Embassy in China delivered remarks at the meeting. They elaborated on the trade and investment policies of Viet Nam and welcomed Chinese investors to start business in Viet Nam. Representatives from Chinese enterprises introduced their business fields and development plans at the meeting. They exchanged views with their Vietnamese counterparts after the meeting. The delegation visited the Linh Trung Export Processing Zone in Ho Chi Minh City and the Industrial Park in Bac Ninh Province to learn their operation, supporting services and preferential policies. They also had in-depth discussions with the management of the zone and the park. Some members of the delegation showed intention to invest in the park and the zone and will go into details with relevant parties after the visit.

During the visit, the delegation also listened to the briefing given by Mr. To Ngoc Son, Deputy Director General of the Asia-Pacific Market Department of the Ministry of Industry and Commerce of Vietnam, Mr. Hu Suojin, Commercial Counsellor of Chinese Embassy in Vietnam, Mr. Chen Dehai, Consul General in Ho Chi Minh City, and Mr. Wei Xichen, Commercial Counsellor of Chinese Consulate General, on local economic development, China-Viet Nam economic and trade relations and business environment in Hanoi and Ho Chi Minh City. Members of the delegation found this was a rewarding experience and they got information of their interest during the Q&A session.