Secretary-General Yang warmly welcomed the delegation led by Secretary Andanar, commended the progress of ASEAN-China relations, and briefed the mandate and recent work of ACC. She also cited that ASEAN and China are good neighbours and good partners connected not only by mountains and waters, but also cultures and traditions. Furthermore, both sides are important partners for the Belt and Road Initiative. President Duterte and several other ASEAN heads of state and government will come to China to attend the Belt and Road Forum for International Cooperation, which is aimed to broaden spectrum for ASEAN-China and the Philippines-China cooperation. Media exchanges and cooperation are not only vital parts of ASEAN-China relations, but also important bridges for mutual understanding of both peoples. In this April 2017, ACC co-organized a reporting trip with the State Council Information Office of China to invite journalists from ten ASEAN Member States to visit Hunan and Jiangxi provinces. ACC will soon organize Chinese journalists to visit the Philippines and Indonesia. ACC will continue to serve as one-stop information and activities centre, and seize the opportunity of 50th anniversary of ASEAN and the ASEAN-China Year of Tourism Cooperation to enhance connections with PCOO and other government agencies and people from all walks of life of ASEAN, and push forward media exchanges and cooperation between both sides, so as to make more contributions to the enduring and in-depth development of ASEAN-China relations. 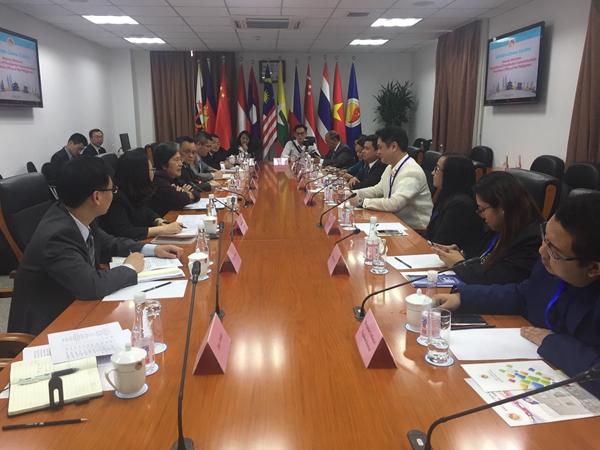 Secretary Andanar spoke highly of the enormous efforts ACC has made to promote ASEAN-China relations, especially in the field of media exchanges. He said that the purpose for this visit at the invitation of the State Council Information Office of China was to exchange views with Chinese counterparts in media authorities and mainstream media, and learn from them the successful experience in media management and operation in order to enhance media capability of the Philippines. As the Philippines takes the rotating chairmanship of ASEAN in 2017, PCOO would like to enhance the publicity of ASEAN to enable more people at home and abroad to aware of the importance of ASEAN. He looked forward to the visit by Chinese journalists to the Philippines, and he expected to increase the level of exchanges and cooperation with ACC, so as to make more contributions to enhance public awareness of ASEAN and ASEAN-China Relations.

The delegation also visited ACC Photo Exhibition, and exchanged views in a warm atmosphere on how to utilize new media to enhance the effects of reports among other things.