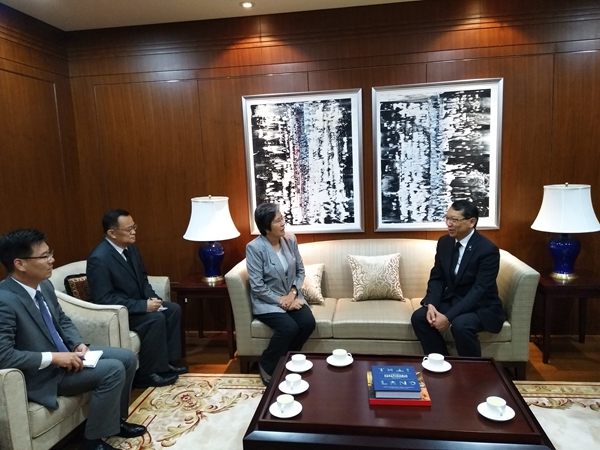 Secretary-General Yang congratulated Ambassador Piriya on assuming the post and appreciated the continuous supports of Thai government and Thai embassy in China to ACC. She briefed the recent work of ACC and stated that Thailand-China and ASEAN-China relations have witnessed ever-deepening development in such areas as trade, education, culture and tourism. The Belt and Road Forum for International Cooperation held in Beijing not long ago achieved important consensus on aligning the Belt and Road Initiative with ASEAN Community 2025 and ASEAN Master Plan of Connectivity 2025, which injected strong impetus to deepening ASEAN-China relations. This year marks the 50th anniversary of ASEAN and the ASEAN-China Year of Tourism Cooperation. ACC is actively implementing 19 flagship projects approved by the Joint Council. She looked forward to maintaining close contacts with Thai embassy and raising ASEAN-China and Thailand-China relations to a new level to the benefit of the peoples of both sides.

Ambassador Piriya spoke highly of the achievements of Thailand-China and ASEAN-China relations. He is optimistic that the Belt and Road Initiative would bring the goal of win-win cooperation deeply into people’s hearts and offers broader space for regional and global prosperity. This important initiative is highly compatible with the development plans of Thailand and ASEAN. He believed that ASEAN-China cooperation would have more fruitful achievements through jointly building the 21st Century Maritime Silk Road. ACC, as an organization aiming at promoting friendly exchanges and cooperation between both sides, has made tremendous efforts in enhancing friendship between both peoples and raising people’s awareness of ASEAN-China relations. The Royal Thai embassy would continue to support ACC’s work and actively participate in the activities held by ACC in order to jointly push forward Thailand-China and ASEAN-China relations.