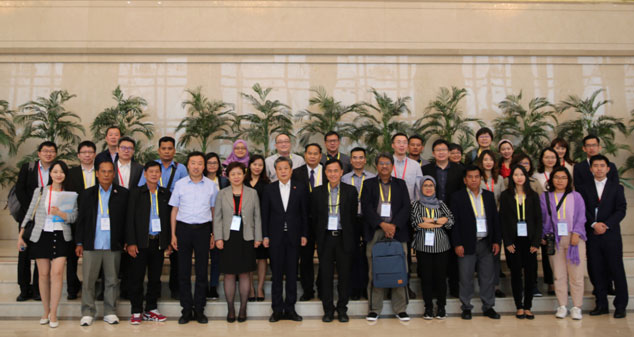 Mme. Chen Shi said that Ningxia and Sichuan are both important hubs for BRI cooperation, with plenty of experience to share in agricultural development, international production capacity and tourism cooperation. She believed that the ASEAN delegation, having attended the Conference on Dialogue of Asian Civilizations in Beijing prior to the trip, would better appreciate the time-honored history and distinctive cultures of Ningxia and Sichuan.
Mr. Thepchai Yong, President of Confederation of ASEAN Journalists said that media cooperation between ASEAN and China has been going on for many years, yet new areas of cooperation need to be explored. The Belt and Road Initiative provides a good opportunity for both sides to tap potentials for cooperation and therefore is widely welcome by the ASEAN countries. As one of the cradles of Chinese civilization, Ningxia has not only achieved great success in social and economic development within a short period of time, but also did a good job in cultural preservation, which the ASEAN countries can draw strength from. Sichuan is an important province in southwest China and plays an important role in BRI cooperation, since it has solid foundation, vast potentials and broad prospects in cooperating with the ASEAN countries.
Mr. Ma Yingjun and Mr. Dai Guangju gave briefings on the history, culture, economic and social development of Ningxia and Sichuan respectively. They hoped that ASEAN journalists would pay more attention to and help publicize the central and western areas of China including Ningxia and Sichuan, so as to promote friendly exchanges and practical cooperation between these areas and ASEAN countries.

The ASEAN media reporting trip to China is co-hosted by ASEAN-China Centre and the State Council Information Office of China, and organized by China Report of CIPG. The delegation consists of 25 senior media practitioners from 18 mainstream media organizations of 10 ASEAN countries. Prior to the trip, the delegation attended 2019 ASEAN-China Media Cooperation Forum held on 14 May and Conference on Dialogue of Asian Civilizations on 15 May in Beijing.