On 16 July 2020, Mr. Guo Chuanwei, Director of Trade and Investment Division of ASEAN-China Centre (ACC), attended and addressed the Online Signing Ceremony of the MOU between the Philippine Economic Zone Authority (PEZA) and 86Links Group. Mme. Charito Plaza, Director-General of PEZA, Mr. Glen G. Penaranda, Commercial Counsellor of the Embassy of the Philippines, Mr. Gong Zhenzhi, CEO of 86Links Group, together with representatives of Chinese and foreign enterprises and business associations, attended the ceremony.
CEO Gong Zhenzhi said that with artificial intelligence, big data and other Internet technologies, 86Links provides enterprises and industrial parks with accurate business matching and helps build digital-driven and cluster-based industrial parks featuring 5G Internet of Things. Believing these advantages of 86Links should meet the need of the Philippine side to develop its economic zones and industrial parks, he looks forward to in-depth cooperation between the two sides. 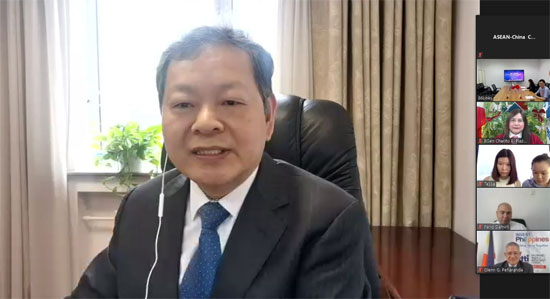 Director Guo Chuanwei mentioned that the year 2020 marks the 45th anniversary of the establishment of diplomatic relations between the Philippines and China. In the phone call with President Duterte of the Philippines on 11 June 2020, Chinese President Xi Jinping commended the solidarity and mutual assistance between the two governments and peoples in combating COVID-19 as a vivid illustration of the brotherly friendship between the two countries. Director Guo Chuanwei expressed the hope that the signing of MOU between PEZA and 86Links Group will not only lay a foundation for the digitization of Philippine economic zones and industrial parks at all levels, but also set an example for more sectors to seize the opportunities of digital economy. Commercial Counsellor Penaranda expressed his thanks to ACC for facilitating the cooperation, saying that China is an important partner of the Philippines as more and more Chinese enterprises engage in the development of Philippine manufacturing and service industries. With offices in several cities of China, the Philippine Trade and Investment Center stands ready to provide Chinese enterprises with customized services to facilitate the business cooperation.
All the online guests witnessed and congratulated on the signing of MOU between the two parties.