ACC as Information Centre（Updated in January 2021）

2021-01-08 13:21:20 source：ASEAN-China Centre
Information is playing an increasingly important role in pursuing the development of ASEAN-China relations in the new era. Bearing this in mind, ASEAN-China Centre (ACC) has made conscientious and continuous effort to collect, analyse, organise, disseminate and study information in various fields such as trade, investment, education, culture, tourism, and information and media, in order to provide the public with accurate information in a timely, accessible and innovative manner. By doing so, we have been able to contribute solid information support to ASEAN-China cooperation. [Setting up special task force and granting financial support]
Information service constitutes the basic function of ACC’s work. The Memorandum of Understanding on Establishing the ASEAN-China Centre between the Governments of the Member States of the Association of Southeast Asian Nations and the Government of the People’s Republic of China positions ACC as a “one-stop information and activities centre” and stipulates that ACC “shall have the dual function of information centre and activities centre” and elaborates on the specific tasks. The revised version of the above-mentioned Memorandum, signed in August 2017, further includes “information and media” as one of the six key areas of ACC’s work. The Information and Public Relations Division (IPRD) of ACC leads the information work, and a cross-department research group has been set up to provide intellectual support. ACC allocates a proportion of its annual budget to provide financial support for information work. Since 2014, ACC has been producing the annual statistic book ASEAN & China in Figures as a flagship project.
[Building information platforms and carriers]
ACC has built up various information platforms and carriers to improve the quality and efficiency of information services. We produce hardcopy reference materials as well as audio-visual products, and reach out to the public by using our outdoor display board, exhibition hall and through exhibition activities in different cities. We provide online information services mostly via our official website, and partly via our Wechat and Weibo accounts. In October 2010, the official website of ACC was launched before the organization body was established in November 2011. National leaders of China and the 10 ASEAN Member States attended the launching ceremony. In March 2020, ACC upgraded its website with a new page layout and added columns to make it more user-friendly and aesthetically-pleasing. The ACC Weibo and Wechat accounts were opened in October 2011 and April 2013 respectively, and as contents continue to grow, so are the numbers of followers and reposts. 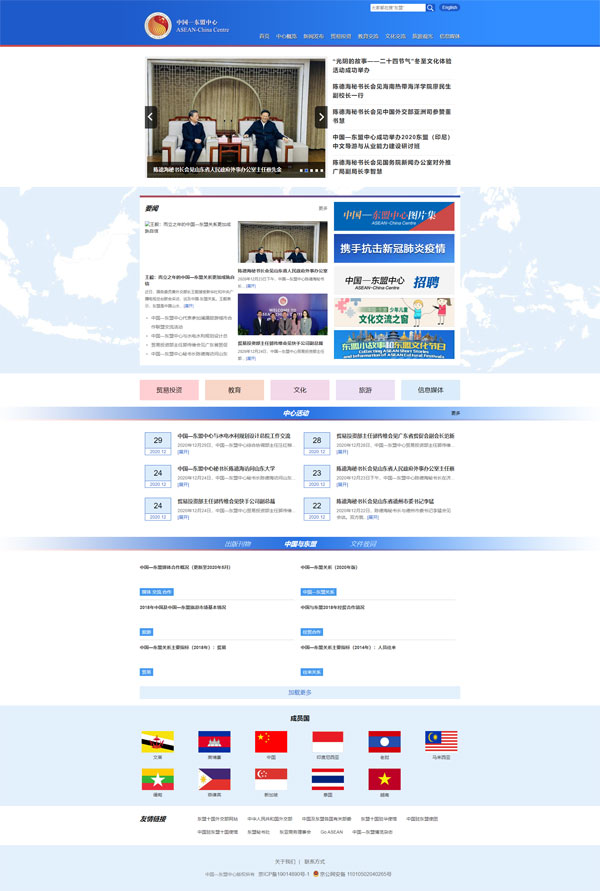 [Information content and products] (find details in the attached)
The information work of ACC is a faithful reflection of ASEAN-China relations, keeping a record of important progress, major events and cooperation in pursuing the development of ASEAN-China relations, sharing information on the latest development and research results, creating a friendly atmosphere and providing practical reference for promoting exchanges and cooperation. Based on the content, our information products are divided into four categories:
First, information on the activities hosted and attended by ACC. ACC posts press releases on its official website, Weibo and Wechat accounts, and compiles the bilingual quarterly Newsletter and annual work report on regular basis. The highlights of activities are presented in the outdoor display board. In addition, ACC regularly updates its pamphlets and promotion videos. 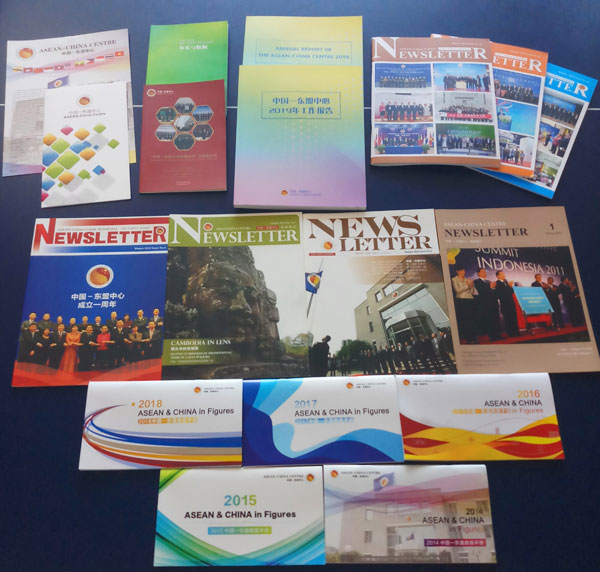 Second, information on ASEAN-China relations and stories about cultural and people-to-people exchanges. Following closely the development of ASEAN-China relations and exchanges and cooperation in various fields, ACC reposts on its official website, Weibo and Wechat accounts press releases  involving high-level interactions, major events, important documents and major projects, as well as information on latest development and cooperation between the two sides in trade, investment, education, culture, tourism, and information and media. We have on our official website the columns of “A Window for ASEAN-China Children’s Cultural Exchanges” “Collecting ASEAN Short Stories and ASEAN Cultural Festivals” and “Joint Efforts to Fight COVID-19”. We also took part in the production of cultural and tourist documentaries such as Hi! ASEAN and Be Your Way, further promoting ASEAN-China friendship.