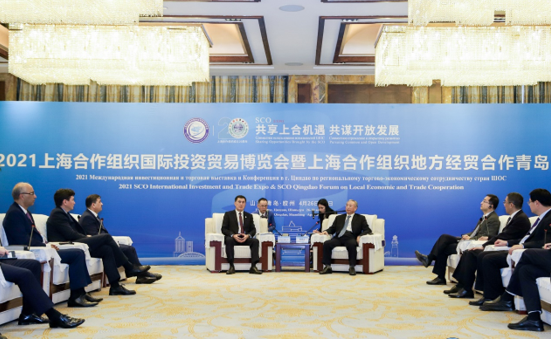 On behalf of the CPC Shandong Provincial Committee and Shandong Provincial People’s Government, Secretary Liu Jiayi extended warm welcome to the attendees. He mentioned that following President Xi Jinping’s important instructions, Shandong Province has achieved tangible and positive results in promoting the establishment and development of the SCO Demonstration Area. This year marks the 20th anniversary of the establishment of SCO. Taking the forum as an opportunity and the SCO Demonstration Area as the bond, Shandong Province will promote to a higher level cooperation at local level with SCO and ASEAN member states and other countries along the BRI routes by deepening exchanges and cooperation in the fields of economic and trade, connectivity, logistics, people-to-people exchanges, and talent training. The province will dedicate itself to serving and integrating into the new development path and contribute to building a community with a shared future for mankind.

Mr. Vladimir Norov, SCO Secretary-General, noted that the SCO Demonstration Area, created upon the initiative of the SCO Qingdao Summit, provides a good platform and promising prospects for SCO member states to deepen their economic and trade cooperation and people-to-people exchanges.

Mr. Chen Dehai mentioned that ACC is willing to work closely with Shandong Province, play a role of bridge and make positive contributions to promoting friendly exchanges and practical cooperation between Shandong and the ASEAN Member States (AMS).