On 14 September 2022, the ASEAN-China Centre (ACC) co-hosted the 2022 ASEAN-China Fair with Beijing People’s Association for Friendship with Foreign Countries (BPAFFC). Mr. Chen Dehai, Secretary-General of ACC, H.E. Mrs. Khek M. Caimealy Sysoda, Ambassador of Cambodia to China, Mrs. Zin Mar Htwe, Charge d’affaires a.i of the Embassy of Myanmar in China, Mr. Dino Kusnadi, Deputy Chief of Mission (DCM) of the Embassy of Indonesia in China, Mr. Thongsavanh Phyathep, DCM of the Embassy of the Lao PDR in China, Mr. Sanmugan Subramaniam, DCM of the Embassy of Malaysia in China, Ms. Chan Su Yin Tracy, DCM of the Embassy of Singapore in China, Mr. Sittikorn Chantadansuwan, Minister Counsellor of the Royal Thai Embassy in China, Ms. Fang Hong, Deputy Director-General of the Department of Asian Affairs of the Ministry of Foreign Affairs of China, Ms. Liu Yuhong, Vice President of BPAFFC, Mr. Li Chuntian, Deputy Party Secretary of the CPC Municipal Committee and the Mayor of Binzhou City, Shandong Province, diplomats from the embassies of ASEAN Member States (AMS) in China, as well as representatives of relevant ministries, organisations, universities, companies and media from both ASEAN and China, including the Ministry of Education of China, China Council for the Promotion of International Trade, China Soong Ching Ling Foundation, China Education Association for International Exchange, Center for Language Education and Cooperation, the Organizing Committee of China-ASEAN Education Cooperation Week, Beijing Foreign Studies University and China Daily attended the event. In total around 120 guests were present at the scene. Secretary-General Chen Dehai stated in his remarks that this year marks the 31st Anniversary of ASEAN-China Dialogue Relations, the 55th anniversary of the establishment of ASEAN and the first year of ASEAN-China Comprehensive Strategic Partnership. ACC will continue to implement the important consensus reached by the leaders of AMS and China, pave the way for deepening friendly exchanges and practical cooperation between the two sides in various fields, promote mutual understanding, bring hearts closer, and make greater contributions to building an ASEAN-China friendly home together. Deputy Director-General Ms. Fang Hong noted in her remarks that it is her great pleasure to attend the 2022 ASEAN-China Fair and expressed her sincere respect to all the friends who have been caring for and supporting the development of China-ASEAN relations throughout the years. Standing at a new historical starting point, China-ASEAN Comprehensive Strategic Partnership has gotten off to a good start with strong momentum. Thanks to the concerted efforts of both sides, China-ASEAN cooperation across the board has been deepening with fruitful results. Looking into the future, China stands ready to work with ASEAN to strengthen solidarity and coordination, deepen mutually beneficial cooperation and create a model of common development, so as to jointly uphold regional peace and stability, and build an even closer China-ASEAN community with a shared future. DCM Mr. Dino Kusnadi said that since the establishment of dialogue relations between ASEAN and China 31 years ago, fruitful results of cooperation have been achieved in all areas. ASEAN is the platform that representatives of the peoples of 10 Southeast Asian nations and China use to speak to each other on a routine basis, and facilitating this engagement is the primary function of ACC. ACC places great emphasis on cultural exchanges and has played a crucial role in the intensive development of ASEAN-China dialogue relations. ASEAN will continue to support ACC in playing an active role in promoting ASEAN-China relations. BPAFFC Vice President Ms. Liu Yuhong said that the BPAFFC has been hosting various people-to-people exchange programs with AMS in the fields of culture, sports, trade, science and technology, tourism, youth and so on. These programs have furthered the mutual understanding and friendship between Chinese people, Beijing people and the peoples of AMS. In the future, the BPAFFC will continue to expand the scope of people-to-people exchanges and cooperation, thus contributing efforts to a closer China-ASEAN community with a shared future. 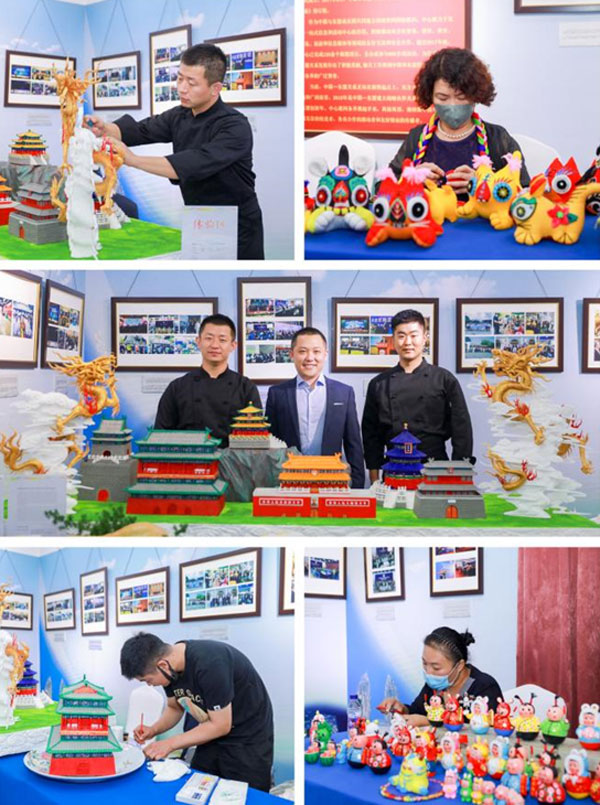 The ASEAN-China Fair showcased the colorful culture and arts as well as unique traditional delicacies of AMS, Beijing and Binzhou of China. Artists and friends from ASEAN and China presented wonderful performances such as dances, singing, instrumental music, martial arts and sand painting. The invited guests visited and experienced the intangible cultural heritage display with great interest, including the Beijing Axis Photo Exhibition, Fruit and Vegetable Carving Experience, Making Cloth Tiger and Painting Huimin Clay Figurine. In a delightful atmosphere, the guests enjoyed the unique charm of ASEAN and Chinese cultures and exchanged views on the broad prospects for ASEAN-China friendly cooperation.