On 2 June 2021, the 2021 ASEAN-China Media Cooperation Forum, with a theme of "Thirty Years On: A New Chapter for ASEAN-China Win-win Cooperation,” was successfully held in Beijing.

The forum was guided by the State Council Information Office (SCIO) and the Ministry of Foreign Affairs of China, co-sponsored by the China International Publishing Group (CIPG) and the ASEAN-China Centre (ACC), and organized by China Report Press. Mr. Tang Heng said the increasingly close people-to-people exchanges between ASEAN and China are a vivid example of building a community with a shared future. The cooperation between the two sides in the field of media has been deepening, creating a good condition for multi-level, multi-channel and diversified media cooperation. It is hoped that the media of both sides will continue to facilitate policy syncing and widely gather consensus from all sides; promote practical cooperation and actively convey confidence and positive energy; focus on sustainable development and consolidate the foundation of public opinion on friendship and cooperation, so as to create a favourable public opinion environment for further ASEAN-China development and cooperation. Mr. Kung Phoak expressed his appreciation for the important role played by the ASEAN-China Centre in deepening media cooperation between the two sides. He said despite the impact of the COVID-19 pandemic, the partnership between ASEAN and China remains strong and vibrant. With the year 2021 marking the ASEAN-China Year of Sustainable Development Cooperation, the strategic partnership between the two sides will be reinvigorated in all aspects. The rapid development of media is conducive to promoting cultural exchanges and building a closer community between the two sides. The pandemic has led to a surge in internet traffic, bringing more opportunities for media cooperation, especially in the field of digital media. Strengthening media cooperation will help both sides to make greater progress in fields such as people-to-people exchanges, technology development, and trade and investment. Ambassador KhamphaoErnthavanh said media affairs in ASEAN and China currently have actively advanced as the main and rapid information hub especially for prevention and control of COVID-19 pandemic as well as providing important role in social-economy, culture, public health, livelihood and so on. The media on both sides should make use of the existing mechanisms such as the ASEAN-China Centre, the China-ASEAN Expo and the ASEAN-China Public Health Framework to make new contributions to promoting the development of relations between the two sides, especially economic cooperation in the post-pandemic era. 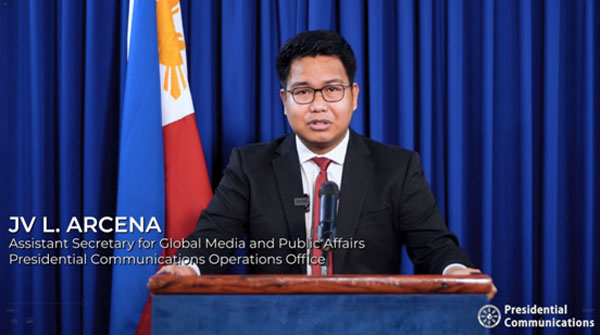 Mr. Jusan Vincent L. Arcena thanked the ASEAN-China Centre for its contribution in strengthening media cooperation and promoting continued peace, prosperity and stability in the region. He said despite the negative impact brought by COVID-19 on traditional media cooperation approaches, ASEAN and China media have strived to use technology as much as possible to promote communication and cooperation under the new normal, share new initiatives and open up new modes of cooperation. This will continue to give a strong impetus to the economic and social cooperation between ASEAN and China and promote sustainable development. Mr. Chen Dehai said the signing of the Regional Comprehensive Economic Partnership (RCEP) is an important milestone in regional economic integration. It will motivate regional economic growth and provide a broader space for ASEAN-China cooperation. The new round of technological revolution and industrial transformation is profoundly changing the way of production and life of people, giving the media industry a new connotation and space for growth, as well as putting forward new and higher requirements for the media industry in terms of content creation and communication strategies. He hopes that the media from both sides should spotlight on anti-pandemic cooperation and economic and social recovery with a focus on the 30th anniversary of ASEAN-China dialogue relations and the ASEAN-China Year of Sustainable Development Cooperation. Media should further tell the story of win-win cooperation between ASEAN and China, help the two sides to promote coordination on policies and synergy of development plans, and continuously expand and deepen media cooperation. In the session discussions, media leaders, journalists and think tank representatives from China and 10 ASEAN Member States (AMS) held in-depth discussions on the topics of "New Prospects for Regional Economic and Trade Cooperation under the RCEP" and "New Media Trends in the New Technological Revolution". They focused on the present and looked into the future, offering advice and suggestions for the sustainable development of media cooperation between ASEAN and China. It was generally agreed that the signing and implementation of the RCEP will bring new economic, trade and investment opportunities to the region, boost confidence in the development of various industries, enhance people's well-being and further promote economic recovery in the post-pandemic era. The media industry faces new development opportunities and challenges under the new round of industrial and technological changes. The rapid development of the communication industry is conducive to promoting information flow, enhancing the connection and interaction between platforms and audiences, and further deepening practical cooperation and people-to-people exchanges between ASEAN and China from the communication level. During the forum, Mr. Yu Yunquan, President ofthe Academy of Contemporary China and World Studies, released a book Keywords to Understand China: Foreign Affairs in the New Era in Chinese and English, witnessed by leaders from both ASEAN and China. Before the opening ceremony, the participants also visited a photo exhibition with the theme of "Mogao Caves Meet Angkor Wat".