In his video address, Assistant Minister Wu Jianghao said that over the past three decades, several generations of Chinese space workers have made remarkable achievements by constantly striving to overcome difficulties to develop the aerospace industry and build up the strength in aerospace. China and ASEAN are good neighbors, friends and partners. In recent years, the two sides have carried out close exchanges and cooperation in space technology applications, communication satellites, space surveying and mapping, making space a new field of cooperation between the two sides. It is hoped that the Chinese and ASEAN teenagers will not only look up to the starry sky, but also be down-to-earth, working hard to learn scientific knowledge and taking on the great task of exploring the mysteries of the universe to jointly create a better future for all mankind. 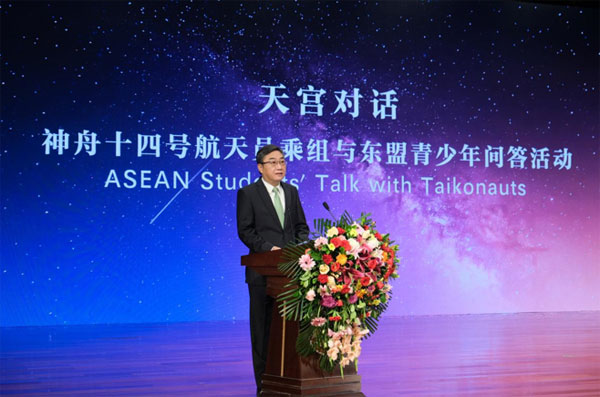 In his speech at the main venue in Beijing, Secretary-General Shi Zhongjun said that AMS and China attach great importance to cooperation in space and look forward to benefiting from space exploration and peaceful use of space. It is hoped that through the activity, young people from both sides could inspire interest, enhance the ability to explore science, and have the opportunity to contribute to the development of space science and technology in AMS and China in the future. ACC will keep playing its role as a bridge, promote closer cooperation in the manned space sector, and engage the two sides in related international cooperation and exchanges at wider scope and deeper level. Ambassador Djauhari Oratmangun, on behalf of the AMS embassies in China, delivered a video speech expressing his appreciation to the co-hosts for organizing the “Tiangong Dialogue” activity, which provides an excellent opportunity for ASEAN diplomatic envoys and young people to interact with Chinese astronauts. It will greatly stimulate young people’s interest in exploring space and learning science, and further enhance ASEAN-China people-to-people exchanges. During the online dialogue between the main venue in Beijing and the overseas sub venues, the youth people of AMS actively asked the astronauts questions, including the biggest challenge of astronauts in space, whether they can use mobile phones and surf the Internet, how to drink and eat, the difference between male and female astronauts, and the most important quality of becoming astronauts. Mr. Chen Dong, Ms. Liu Yang, and Mr. Cai Xuzhe answered these questions one by one. The three astronauts also wished the space dream of young friends come true at an early date and looked forward to more fruitful cooperation between AMS and China. At the main venue in Beijing, Mr. Liu Boming, Chinese astronaut who carried out the Shenzhou VII and Shenzhou XII missions respectively, also gave a live lecture, sharing his space experience and interacting with young students from AMS and China.

The “Tiangong Dialogue” activity attracted wide attention in AMS and China, and the media of both sides reported the activity comprehensively.